Apple Gets Trademark for Its Store Design

by Mel 9 years ago3 months ago 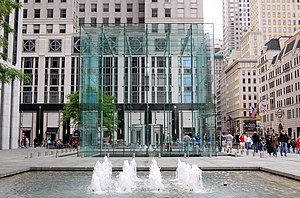 The Apple Store has a look so distinctive that you’d know you’re in one even if you’re led inside blindfolded and all of the products are covered up. The cool mix of minimalist design and the floating glass staircase are distinctive touches that spell Apple.

With Apple’s store design so uniquely Apple, it was an understandable decision for Apple to try and trademark its stores’ look. It actually took three years for the US Patent and Trademark Office to make a decision but it finally got the trademark it was asking for.

An Apple store specialist revealed that the so-called V2.0 of the mall store was the one approved for the trademark. The V2.0 design includes the following features: the mall store will have glass windows that are framed with stainless steel panels, a backlit Apple logo is strategically placed on top of the store, the floors are made of stone, the interior has stainless steel walls and wood display tables.

Apple opened its first store in 2001. But the first appearance of the so-called V2.0 store design first appeared in 2006. Apple officially applied for the store design trademark in 2010 but the USPTO initially rejected the petition because the organization deemed that the design was not very distinctive.

Apple was quite insistent about getting the trademark and submitted 122 additional pages to support its claim. This was followed by an additional 681 pages of material after the 122 page addition was also rejected.

Apple may be right in fighting for a the trademark on its store design because many stores are now imitating its aesthetic. One of the most blatant displays of copying happened in China when stores that claim to be official Apple Stores and have the distinctive Apple interiors began popping up. It was eventually found to be all fake stores.