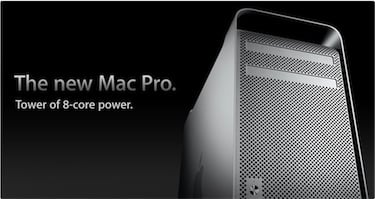 Apple today announced two new updates to popular products. They issued a press release this morning for a new version of the Mac Pro as well as Xserve.

From the Mac Pro Press Release:

The new Mac Pro features the latest Quad-Core Intel Xeon 5400 series processors based on state-of-the-art 45nm Intel Core microarchitecture running up to 3.2 GHz, each with 12MB of L2 cache per processor for breakthrough performance and power efficiency. With a new high-bandwidth hardware architecture, dual-independent 1600 MHz front side buses and up to 32GB of 800 MHz DDR2 ECC FB-DIMM memory, the new Mac Pro achieves a 61 percent increase in memory throughput**.

Every Mac Pro comes standard with the ATI Radeon HD 2600 XT graphics card with 256MB of video memory. The Mac Pro includes a new PCI Express 2.0 graphics slot that delivers up to double the bandwidth compared to the previous generation, and supports the latest generation of graphics cards from NVIDIA, such as the NVIDIA GeForce 8800 GT with 512MB of video memory, or NVIDIA Quadro FX 5600 with 1.5GB of video memory and a 3-D stereo port for stereo-in-a-window applications. With support for up to four graphics cards, the new Mac Pro can drive up to eight 30-inch displays at once for advanced visualization and large display walls.

Apple also announced the release of the new version of Xserve in another Press Release:

AppleÂ® today introduced the new XserveÂ®, a 1U rack-optimized server that is up to twice as fast as its predecessor* and includes an unlimited client license for Mac OSÂ® X Server Leopardâ„¢. Starting at just $2,999, the new Xserve has up to two Quad-Core 3.0 GHz Intel Xeon processors for 8-core performance, a new server architecture, faster front side buses, faster memory, up to 3TB of internal storage and two PCI Express 2.0 expansion slots for greater performance and flexibility.