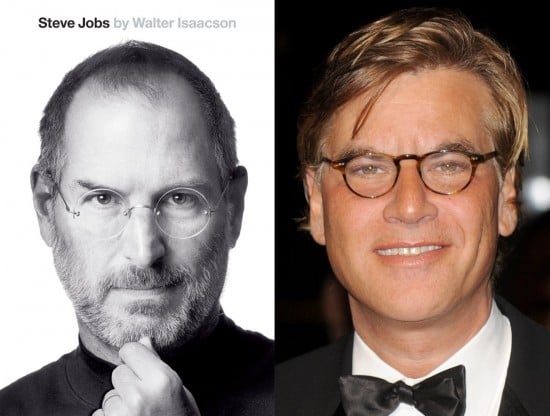 You know Aaron Sorkin from his TV shows like The West Wing and The Newsroom, as well as his big-screen scripts for The Social Network and Moneyball. His signature is intelligent, thought-provoking, opinionated monologues, so many thought he was a fascinating choice for writing a movie about a character as polarizing and legendary as Steve Jobs. But his choice for the film’s dramatic structure has me scratching my head (though plenty of others are excited about it).

He intends for the movie to last around an hour and a half, split into three half-hour acts. Each act will play out in real time — thirty minutes for viewers will be thirty minutes for the characters on the screen. And each one is set backstage right before one of Jobs’ keynote speeches where he launched a major new product.

A bold choice? Absolutely. But I can’t quite get my head around why Sorkin chose to embrace the creative and narrative limitations this will create.

The real-time thing doesn’t surprise me. Sorkin is known for loving long, uninterrupted takes, usually with people doling out loads of exposition while walking briskly along the corridors of power. This format lends itself nicely to that particular narrative structure, so Sorkin’s playing to his strengths there.

It’s the other part I’m having trouble with. How do you cover the entirety of a man’s life — especially a life as storied and complicated as Jobs’ — with just three half-hour scenes? The answer, obviously, is you don’t. Sorkin acknowledged this today when speaking with The Daily Beast and Newsweek about the movie. He’d previously said that he set out to “identify the point of friction that appeals to me, and dramatize that.” Based on this three-part real-time story structure, it sounds as if the “point of friction” he’s selected is Jobs’ relationship with Apple. Or he may even have chosen to dramatize the late CEO’s own conflicting internal nature, a la “Jobs vs. himself.” Either of those would be a feasible approach to take, but I still don’t know how he intends to do justice everything that Jobs was in such a limited format.

As for the three keynotes the movie will be structured around, they are: the original Mac’s unveiling in 1984; the introduction of Jobs’ new company, NeXT, in 1990; and showing off the first iPod in 2001. These three time periods give Sorkin a narrative arc of Jobs’ tumultuous relationship with John Sculley and eventual ousting from Apple, to his time away from Apple founding NeXT, to his return and rise to success as Apple’s CEO. In storytelling terms, this gives Sorkin a hero’s journey: the fall from grace, the penance and finding oneself, and the forgiveness and adoration. It makes sense in that light.

But what about all of the stuff this approach will leave out? There’s no way Jobs’ biggest and most-remembered successes — namely the iPhone and iPad — can be incorporated into the movie. And what about his family? His romance with his wife Laurene Powell, his struggle to admit parentage to daughter Lisa Brennan, his relationship with the sister he discovered as an adult and adored, Mona Simpson? Heck, will there even be room for Woz in this movie? Probably not.

I can appreciate a desire to whittle down the story of a man to its most basic essence, but I fear Sorkin will be doing a disservice to Jobs’ memory with this extremely condensed take on the man’s fascinating life. I also can’t help wondering if Sorkin’s decision was in some way a reaction to the Ashton Kutcher biopic, which is taking a more linear approach, incorporating more of Jobs’ life story. I hope not.

But hey, film is a director’s medium, not a writer’s. The director gets final say over just about everything, so whoever ends up helming this thing could choose to go a different way with Sorkin’s script — or throw it out altogether in favor of another scriptwriter. It’s unlikely Sony would let that happen, given how much they’re probably paying Sorkin to write this script. But you never know.