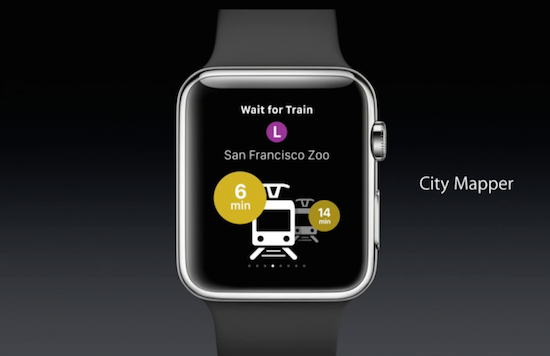 The launch of the Apple Watch is growing nearer and excitement for Apple’s latest product is on the rise amongst fans. While we haven’t seen everything the new device can do just yet, its potential is starting to become much clearer. The Watch won’t simply be a conduit for displaying notifications and alerts on your wrist. It will do much more than than that, including having the ability to run its own apps specifically made for its smaller screen and touch interface. While few apps have been officially announced as of yet, here are six that we’d like to see on the Apple Watch when it is released.

Apple Maps still doesn’t provide any kind of directions for using public transit – such as buses, trains, or subways – when navigating a city. Rumors persist that it is a feature that will be coming in future updates, but until then we have to rely on apps from third parties to fill that void. Having an app like Citymapper on your Apple Watch would allow the device to alert us to the best mass transit options that are available in whatever location we find ourselves, providing a current schedule for buses, trains, and other options. A public transit app would also provide directions to the closets bus stop or subway station, and send alerts for when its time to exit the bus or train as well. Such an app could even share information on the price of fares, and potentially allow us to use Apple Pay to cover those costs too. A proper app for Public Transit could become an indispensable function for Apple Watch owners who are also frequent travelers and daily commuters too.

Want to know what’s happening in a major sporting event, but remain conspicuous about it at the same time? A version of the ESPN app for the Apple Watch would let you do just that, and whole lot more. Imagine being able to select your favorite teams, and then have their latest scores, updates, and highlights sent directly to the watch’s screen. The app would also allow you to share the latest sports news with friends, and even send them a custom taunt based on the performance of their favorite teams too. This type of app would make it easier than ever to follow the action of a game without having to constantly check your phone for updates, and seems like a no-brainer for sports fans everywhere. 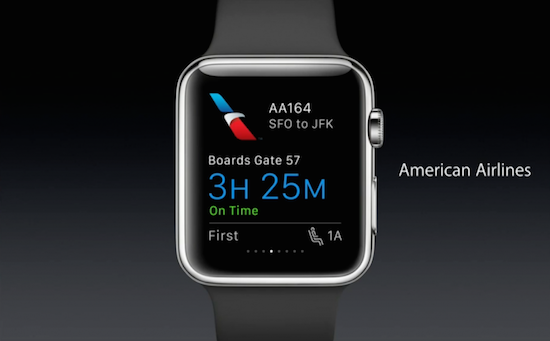 Most of the individual airlines have created apps for the iPhone at this point, and they each provide varying degrees of functionality. The ideal Apple Watch equivalent would offer the ability to check in automatically directly from the device, view wait times at security checkpoints, and provide updates on flight delays or gate changes. The same app would also serve as a passengers mobile boarding pass and give suggestions for finding places to eat, or grab a drink, in the airport terminal that you are currently located in. Upon reaching your destination, it’ll even tell you where to go to collect your bags.

There is no denying that Uber and Lyft have certainly changed the way we get around town, allowing us to request a ride with a few taps in their respective apps. The service is generally quick and inexpensive too, which is why both have become incredibly popular. Now imagine having the ability to request a ride from your Apple Watch and receive updates on the status of your vehicle right on your wrist. Notifications could keep you informed at all times of the location of your driver, and alert you to when you need to be at the pick-up point. When you arrive at your destination, you simply tap the screen of your watch to confirm payment, all without ever taking your phone out of your pocket or bag.

With its GPS tracking capabilities, built-in heart rate monitor, and array of movement sensors, the Apple Watch is clearly going to appeal to the fitness crowd. Apple will no doubt ship the device with an app that will track our workouts and seamlessly share the data with the Health app on our iPhones. But there are some third-party fitness applications that will be fantastic to have on the device as well. For runners and cyclists MapMyRun and MapMyRide are essential training tools that provide valuable feedback on performance. Having that information available on your wrist while running or riding would be fantastic, as it would not only be able to show time, speed, and distance, but also offer navigational cues too. Full integration with these apps has the potential to make the Apple Watch the ultimate fitness device ever.

RetailMeNot Coupons allows users to search for money-saving coupons from over 50,000 grocery stores, retail outlets, and restaurants, and then displays them on the screen of your iPhone so that they can be scanned at checkout. It also gives users the ability to bookmark their favorite stores and restaurants, providing automatic alerts when there are new deals for those specific places. Add in the ability to share coupons with friends, and an option to receive reminders when coupons are about to expire, and you can understand how this app can save you money. An Apple Watch version of RetailMeNot would put an image of your coupons on your wrist so that you only need to show the cashier your watch to take advantage of the discount. It could also provide alerts for location-specific discounts, sending a notification to the screen when you walk by a store or restaurant that is currently offering a promotion. The possibilities for geo-fenced notifications makes this an exciting prospect for sure.