You are here: Home / Mac / There’s no reason why you shouldn’t have Google Mobile Apps 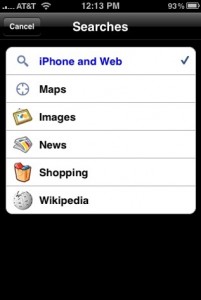 A few months back, HTC and LG pioneered the Google Mobile Apps into their phones. Including them as a “one stop shop for everything Google” made everything easier. Months later we have a great update to the mobile application and we’re glad that they have it for the iPhone, following the disparity over the Apple vs Google VoIP application tensions.

Google Mobile Apps has it all: GMail, search, maps, Google Docs, GTalk, Reader, YouTube and more. It’s so useful, I’ve actually moved the icon to the main taskbar. After downloading this, it made me realize just how powerful and comprehensive Google has become in recent years. They’re practically got everything in software down, it’s scary. And with the recent release of the Nexus One, it just goes to show what they’re after next — hardware.

The new version adds support for China. Whoops, we know what happened there.

Google Mobile Apps is free. I don’t see any reason why you shouldn’t have this on your iPhone.