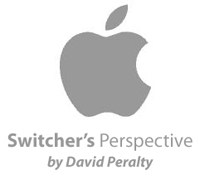 One of the key things that I noticed when I got my MacBook Pro is that it is slick looking. I worried that it wouldn’t stay pretty for long. I am pretty rough on my computers.

The ThinkPad paled in comparison, and was smaller in size than the MacBook Pro. I found myself enjoying the simplicity of the machine’s design, as well as the look of strength that it had.

One of the more interesting things with the MacBook over other laptops I have used is that the MacBook has no ports on the back. Everything is on either side or the front. This is due to the hinge for the screen and whatnot.

On the left side I have the Magsafe power adapter which is both helpful and annoying. Sometimes it comes out easily when I don’t want it to. Other times it saves me from pulling the notebook onto the floor as I snag the cable with my foot.

Next I have a USB port, one of only two on the MacBook Pro. I feel that having only the two ports, one on each side, isn’t really enough. I guess this is because I am used to working on a normal desktop computer, where everything is plugged in via USB.

On the front, I have a slot load superdrive. I am really against optical drives being on the front of laptops. It makes putting in or extracting optical media difficult in tight situations, like in a car, plane, bus or train. The drive works relatively well, but I find it a bit loud.

Memory has already become an issue on my machine. I have the included 1 Gig, and I know I will have to get another stick because I find myself using it all up. I have always been a power user, and being on OS X hasn’t changed that one bit. I find that I can make even the best operating systems sluggish after a day of constant work related use. Hundreds of Firefox tabs, dozens of text editing windows, image editing software, iTunes music playing in the background, and things begin to slow down quickly.

One last major con in the hardware side of things in my mind is the speakers. Laptop speakers are never good, but I found the MacBook Pro is rather quiet, and not as nice as my ThinkPad. I found this especially odd, since Apple makes the speakers “look” so big on each side of the keyboard.

Another positive side of the MacBook Pro is its iSight camera. It allows you to take simple pictures and videos. I really enjoy this addition, and think this should become standard on all laptops.

The best thing of course were the surprises built into the device. Things like a keyboard that illuminates, a screen that can sense the ambient light and adjust its brightness, and ease of control of all the special additions. These quickly become icing on the cake that is the MacBook Pro experience. You quickly forget the limitations of the hardware and just enjoy the Mac experience.

When it comes to value for the money, just the raw hardware, not including the software makes the whole thing worthwhile. If I had to pick between this machine and others of a similar price, I am fairly certain that I would still pick the MacBook Pro.