Learn all the screenshot secrets for macOS, including keyboard shortcuts and the advanced Grab application.

If you’re going to be taking screenshots on a Mac, you’ll need to know the basic keyboard shortcuts.

Shift-Command-3: Capture the entire display. If you have more than one display, this will capture one file for each display. This will captured immediately when you press the shortcut.

Shift-Command-4: Capture a selected region. Your cursor will turn into a crosshair, which you can use to select a specific region of your display to capture. Hold the left mouse button down to drag your selection, and the release the mouse button to capture.

By using the modifier keys, you can expand the basic screenshot tool’s capabilities.

Control: Hold the Control key when invoking the screenshot command (Control-Shift-Command-4, for example) to copy the screenshot to your clipboard instead of saving it to your Desktop. Then paste it into any application with the Paste command (Command-V). Depending on the application’s settings, this might not work in forums or CRMs that require you to upload images to a server, like WordPress.

Shift-Command-6: If you have a Touch Bar MacBook Pro, this will capture the Touch Bar as a screenshot.

There’s also some tricks you can do with region selection.

Tap Spacebar: Turns the region selection icon into a camera icon, which will now capture a full application window, complete with an attractive shadow. You can use this on full application windows, dropdown menus, dialog boxes, warnings and more. Basically, if you want to capture UI element that already has an in-application boundary, taping Spacebar might automatically allow you to select it perfectly.

Hold Spacebar: Hold down the spacebar to drag your selected region around your screen. This allows you to reposition a region selection if you started in the wrong spot. It’s especially useful when you’re trying to center something in a screenshot, which is coin-flip levels of hit-and-miss for me.

Hold Shift: After you’ve made a rough selection, you can control resizing by holding the Shift key. This limits resizing to just one axis. If you hold down the Shift key and drag to the left, for example, you’ll only be able to adjust the horizontal axis. The same goes for dragging up and down on the vertical axis. Release the Shift key, and you’ll find the selections snaps back into standard mode, so you need to click to capture while still holding Shift. It’s a little finger-pretzel, but it can save you from redoing an entire capture because you grabbed just a little too much scrollbar.

By default, screenshots are saved as PNG files on your Mac’s desktop. If you don’t like that, you can use some Terminal commands to change how things are done.

Change save location: Use the Terminal command below, replacing the save  path with where you want to save all new screenshots.

Change file type: To change the file type of new screenshots, use the Terminal command below with the correct filetype at the end of the command. You can save new screenshots as GIF, PNG, JPG, TIFF, PDF and a few other formats. The killall command after the semicolon restarts the SystemUIServer process, allowing the change to take effect.

Disable window shadow: If you like capturing application windows but don’t like the shadows that come with them, you can disable those with the following Terminal command:

To re-enable the screenshot shadow, change “true” to “false,” like so:

If none of these built-in features get you where you need to go, then you can use Grab instead. Grab is a built-in application for macOS that makes slightly more advanced screenshots. It can do a lot of things that the more basic tool can’t, like capturing timed screenshots or including the cursor in your image. It’s a little clunky for daily use, but if you just need to grab a screenshot with a cursor every one in a while, you’ll find it’s pretty handy.

1. Open Grab from /Applications/Utilities/Grab.app or type “Grab” into Spotlight or Launchpad. 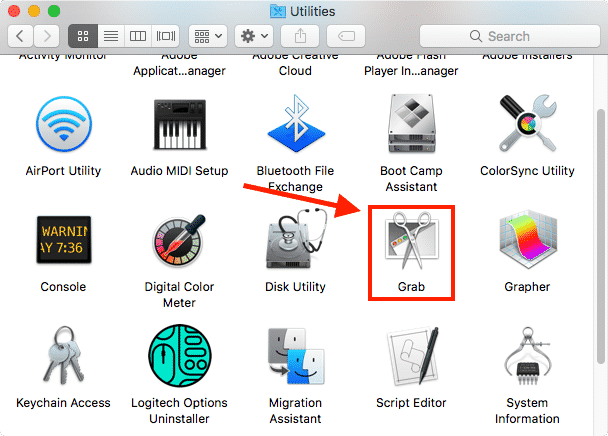 2. Click the Capture menu in the menu bar to see the types of captures you can create.

3. The first three are already accessible through the commands we talked about above. Selection is just ??4, and Region is the same but after tapping the Spacebar. Screen is the same as ??3. The last one, Timed Screen, is the only unique capture type in the Grab menu, so let’s click that.

4. The pop-up box will tell you that you can capture the entire screen after ten seconds by clicking “Start Timer,” so let’s do that.

5. The timer will count down, and after ten seconds we’ll get in a screenshot!

6. If you want to include a cursor in your screenshot, first go to Grab’s Preferences. 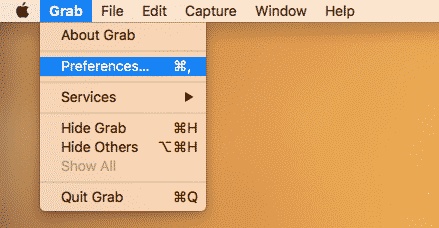 Here you can select the cursor you want to include in your timed screenshots. Then, just start the timer as we did above, but position your cursor in the same place you’d like it to appear in your final screenshot. 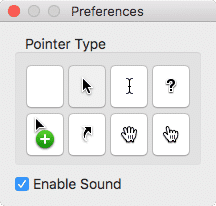 7. Once you’ve made a screenshot that you like, choose “Save” from Grab’s File menu to save the file as a JPG, PNG or TIFF.