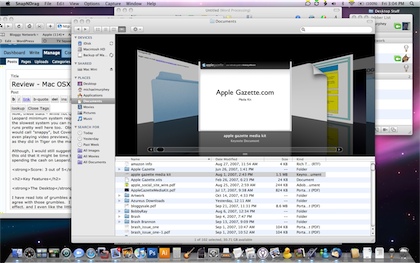 Apple’s latest OS update is here. It’s name is Leopard – but you probably already know that. The latest version of OSX features a number of upgrades and enhancements – the question is, are those updates and enhancements worth your $129.

Hmm…let’s take a look and see.

First things first, you have to install this puppy – so, how complicated is it? It really couldn’t be simpler. You insert the install disk, click on the icon, and it goes to town. It restarts the computer, asks you what language you speak, finds your hard drive, and the update begins.

Installation of software doesn’t get any easier than this.

Now, these stats – while not QUITE the bottom of the barrel for Leopard minimum system requirements – are pretty close to the slowest system you can run it on…and I have to say, it runs pretty well here too. Obviously everything isn’t what you would call “snappy”, but Cover Flow works well in the finder, even playing video previews, and applications open just as well as they did in Tiger on the machine.

Although, I would still suggest to people that are on machines this old that it might be time to upgrade the hardware before spending the cash on Leopard.

I have read lots of grumbles about the new Dock…but I don’t agree with those grumbles. I like the new Dock. I love the 3D effect, and I even like the little cross walk looking separator. What I don’t like, however, is the transparent menu bar, and I really, REALLY, wish I could turn that off and make it solid. The transparency ads nothing to it for me, and is actually a little distracting. I’m sure I’ll get used to it – but I don’t like it.

The new Finder isn’t perfect, but it’s close. I love the iTunes like interface, and I have found Cover Flow to be extremely useful when searching for images. Also networking has been really simplified for Leopard, and I love the fact that my other Macs are just sitting right there in the Finder.

The searches are nice, and immediate access to spotlight and Time Machine are great for finding things that you’ve lost, but there is one thing that REALLY wanted in the Finder that I didn’t get…TABS. I hate having multiple Finder windows open, and while I feel this will be minimized by the new look and feel of Finder, I really wish their were tabs that would allow me multiple windows in one space.

Quick Look is a fantastic time saver. It does exactly what it says it does. It allows you a quick look at just about anything you want to see. Being able to play video without having to launch an application is great. So is looking through PDF files. If I need a small piece of information from a document, I don’t have to waste time opening it up.

This is one of those “little” things that, after you have it, you can’t live without it. I expect it to be in every operating system from now on.

How the heck did backing up files become fun? I’ll be one of the first to admit that Apple isn’t being “revolutionary” by adding a back up utility to Leopard. It’s been done before and there are dozens of third party applications that will do this as well. What Apple has done, however, is make it fun and super easy. If you have an external drive – even if half of it is full of all your “legal” video content you’ve been downloading off the web, you can simply select it, and Time Machine will go to work backing up your stuff.

You can tell it to skip certain things, so your wife won’t find that stuff you’re hiding from her, and still never have to worry about losing an important file ever again. The interface is completely over the top, but in a good way.

I mention Photobooth in the title as well because you can do all of the effects and background trickery that’s in iChat 4.0 in Photobooth as well. In fact, I might even start messing around with this and video podcasting. It’s fun.

Tabbed chat is now here, but I can’t find a way to customize the color of the bubbles of people I’m chatting with – and that could be a problem. I don’t want to get confused as to who I’m talking to. (If anyone knows a way to do this, leave it in the comments below, and I’ll update this).

iChat is filled with fun features – but most of it, has been available from other means for a long time. It is nice to see Apple catch up with some of the other 3rd party IM clients out there.

I don’t like Spaces. They’re just not for me. I’ve tried to get used to them, and use them for organizing my workflow (having all the podcasting related apps in one Space, and internet apps in another Space for example)…but I find them to be more trouble than their worth. I think the concept was executed well, but I just don’t have a use for it.

As much as I don’t care for Spaces, i DO care for Stacks. I find Stacks to be very helpful, and a feature that I’m going to be using constantly. Its another minor enhancement, that is really going to be a time saver. I’m a much bigger fan of the grid layout than the fanning, but both are very helpful.

I have had some minor problems with Leopard. For example, I cut out several web widgets to make Dashboard useful for me, and they worked great, until I left Dashboard, then returned to it. Now they’re just big white squares, and I can’t seem to get them to work.

No operating system is going to be perfect right out of the gate, but I think Apple has done a great job with Leopard. We’ll continue to talk about it here at Apple Gazette extensively over the next several weeks (and really, until 10.6 comes out). So if you’re new here, you might want to grab the RSS Feed and stick around.

All in all, I’m very happy with Leopard. It’s not a revolutionary update. Most of the new features are excellent, though, and I truly think it’s worth your $129.

Final Leopard Score: 4 out of 5