Pulsar – Satellite Radio on Your Desktop

Let’s get this out of the way right now: I’m a Howard Stern fan. Like him or hate him, the guy changed radio as we know it, and for that, I thank him. Bababooey to all of you.
Because of that – and the commercial-free radio offerings – I signed up for Sirius Satellite Radio a few years ago, and hooked up systems in my cars. When I went to work, I listened to the online version on my Windows XP-equipped Dell box, and had no problems at all. When I came home to my Mac however, that was a different story.
Sirius’ online player doesn’t play well with Safari or Firefox, and when they did work, I had to login several times just to get it going. Plus, I didn’t have the benefit of seeing the names or artists, because that feature wasn’t supported. It was a bit irritating. I had heard about some programs that would work on the Mac, but most were a dead-end until I bought Pulsar.
Pulsar is an app by Rogue Amoeba, a company that has quite a few different Mac offerings. It’s designed to stream Sirius and XM radio (yes, both services, even though they merged) right to your desktop in a handy little player. After you enter your login info and password the first time, you’ll never have to change your settings or login again, which makes the process a lot easier than going through the web interface.
Once you’re signed in, you can either manually go through each station or even pick a list of favorites, like this: 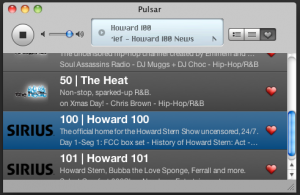 Each listing has a little heart by it, showing its favorite status. Plus, all of your bookmarks update as the songs do, so you can know what’s playing before tuning in. After all, who wants to hear Barry White when you’re looking for NWA?
But if the interface is too big for you, don’t worry, because it minimizes down into an iTunes-esque format.

Just minimize and now you can put the player right in the corner, out of the way of your active projects but still useful if need be. It’s a handy little feature that I like.
So is it worth the $15 price tag? If you’re a Sirius/XM fan, then definitely. Since most of my time is spent either in the car or at the computer, this maximizes my monthly investment in Sirius, plus gives me added entertainment. It also saves me the hassle and exasperation of logging onto the web interface and hoping it works. But if you’re not a Sirius subscriber, there’s no reason for you to get this, because there’s nothing you can do with it. Not until you join the revolution, anyways.
Kevin Whipps is a copy editor, writer, photographer and custom car builder based in the Phoenix, Ariz. area. For the past 10 years he's been building his portfolio, mostly in the automotive publishing industry. When he's not wrenching on cars, most of his time is spent discovering new gadgets and toys, and of course, using everything Apple. Whipps is also married, and has a baby boy, Kevin Whipps Jr., coming on February 7, 2010.