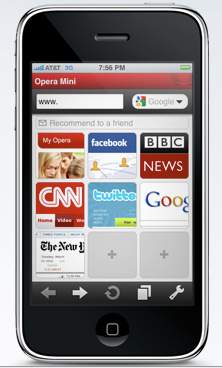 It’s been talked about for a little while now, but Opera has been working on Opera Mini for the iPhone. Just yesterday they turned it in to the App store for consideration, and now they have a counter up on their blog – with a contest to boot, taunting Apple along the way.

So the big question here is why? It seems like a gimme that Apple was turn down the app like all of the other mail apps they’ve turned down in the past. That’s because it “duplicates functionality,” which is one of those no-nos on the iPhone SDK. Engadget has the scoop on the program:

Remember, Opera Mini relies on Opera’s servers to render and compress pages before sending them back to the iPhone for display. As such, there’s no code interpretation being done by the software — a definite no no for approval. So the only thing that could cause Apple to reject the app would be a perceived duplication of core iPhone functionality even though it alreadyÂ approved several WebKit-based browsers. Whatever happens, this is going to be good.

So true. There’s another good point over at Daring Fireball:

(My money, by the way, says Apple will accept the app. I know thereâ€™s much speculation that Apple wonâ€™t allow an alternative browser that doesnâ€™t use the system version of WebKit, but Opera Mini isnâ€™t doing JavaScript client-side, so it doesnâ€™t break the â€œno interpretersâ€ rule.UPDATE: And if thereâ€™s a problem, I bet itâ€™sÂ the security ramifications of Opera Miniâ€™s design.)

There’s a lot of interpretation to be done on both sides of the fence here with this one. My guess is that it’s approved within the next week, then pulled again in a few months when there’s some kind of security issue. Then again, I’m just a dude with a keyboard, so what do I know.