The G4 App Features Booth Babes on the iPhone 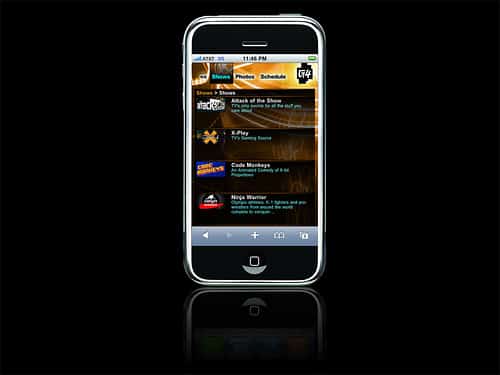 Every fan of G4 Tech TV and G4TV.com should have this free application from the App Store! The official â€œG4â€ App brings the massive gaming and technological news source to the palm of ones game-callused hand.

For fans of Attack of the Show, featuring the gorgeous Apple TV-licking bombshell from Iron Man 2, Olivia Munn, great high quality video of stories are presented in the â€œG4â€ App, as are videos for X-Play and the Feed. Just thumb through the choices and queue up Attack of the Showâ€™s search for the ultimate G4 booth babe contest. The video focuses on the assets of the three finalists, three stunning girls who game prodigiously, one of which will be the G4 Booth Babe at the E3 mega event!

For many years now, the experts at G4 have given up to the minute news updates on everything that is popular culture. Coverage of the San Diego and New York Comic Cons, every E3 expo and every technology, Apple product and gaming event in between is found in stunning brilliance on G4 TV and, now, the â€œG4â€ App!

There is even a free gaming companion, complete with a Cheats Section, in the â€œG4â€ application, so that the X-Box Live sniping can continue with ease.

There is humor, as in â€œOlivia Bites Kevinâ€™s Foil Wrapped Cucumber,â€ there is up to the minute news stories on everything dealing with popular culture, as in â€œMichael Emerson on LOST Finale & Hurleyâ€ and of course the computing and technology wisdom the serious geek would expect.