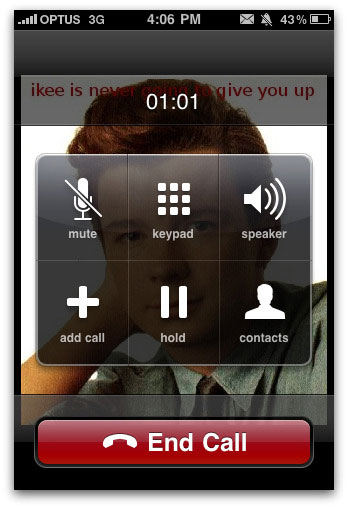 There’s a new worm in town (specifically a town in Australia) and it is affecting jailbroken iPhones. The worm is called “Ikee”. If you have a non-jailbroken iPhone you pretty much don’t have to worry about a thing.

But if you’re on a jailbroken iPhone, then consider yourselves warned.

At the moment, the worm is not destructive in behavior. What it does is actually annoyingly funny. The worm simply changes your background to a photo of Rick Astley (Rickrolled, much?) and looks for other phones on the network for infect.

While the effects of the worm may not be that serious now, it opens up a whole lot of scary possibilities and exploits for the iPhone. I’m pretty sure hackers are rejoicing at this news.

The worm targets iPhone owners who have not changed the default password after insalling SSH.

With this said, I wonder if people will still consider jailbreaking their iPhones if iPhone worms become a norm. And I wonder, iPhone anti-viruses?