Ctrl+Alt+Delete Goes to the iPhone

by Kevin Whipps 12 years ago11 months ago 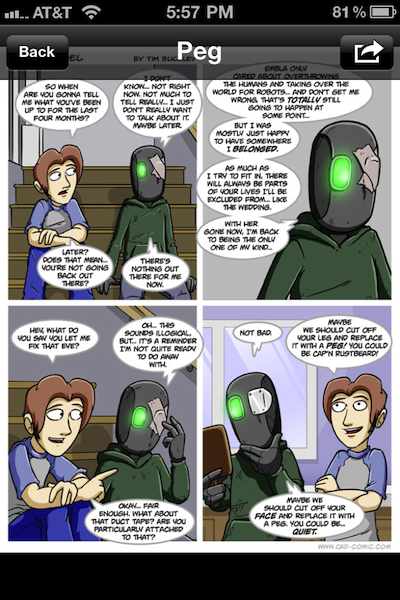 I’m a comic book guy, which means I’m also a fan of web comics, the online version of the Sunday funny pages. One of my usual reads is Ctrl+Alt+Delete, a comic about a goofy kid who loves video games and building cool techy gizmos, but isn’t very socially adept. Well, they’ve officially released an app for the iPhone, and it went live yesterday.

The app isn’t perfect. First off, there are no zooming options on the images, which means you have to squint a bit to read each comic. Second, there’s in app purchasing, which seems a bit odd considering the free nature of the web comic itself. On the plus side, readers have access to lots of comics, making it easy to catch up if need be. It’s free too, which is also nice.

One last thing: Don’t order the iPad version. Yes, it says it’s available, but it’s not working for crap right now. Wait for an update, then go for it.