Connect Your Xbox One Controller to Your Mac

The Xbox One controller is one of the finest handheld controllers on the market. It’s a case study in usability and ergonomics. The total lack of major changes over the years is a testament of just how “right” Microsoft made the Xbox controller. No hard edges, everything is in easy rich, comfortable with any hand size, and intuitively laid out. It’s ideal. Connecting an Xbox One Controller to your Mac is not quite as easy. You’ll need to do a little bit of prep work to get the Xbox One controller functioning with macOS.

Wireless functionality is fortunately spotty on the Mac. If you try to connect an Xbox controller wirelessly with its USB dongle, you won’t be able to establish a connection. The functionality has caused kernel panics since macOS El Capitan (10.11), and it had to be disabled to make the rest of the software usable.

Wireless over USB doesn’t work, but strangely, Bluetooth does work, but only on controllers made after August 2016. Microsoft will help you figure out which version you have. Those controls have the correct Bluetooth transmitter in them, and macOS will automatically support the connection. Since that’s essentially a plug-and-play operation, we won’t cover that here. We were not able to test the functionality for this post.

In every other case, the Xbox control needs to be connected with a wire to work. It’s also the most reliable for any type of controller connection. Xbox One wireless controllers also have a micro USB port on the top, so they’re relatively easy to connect to your Mac. As of now, this is the only way to connect an Xbox One controller to the Mac.

As a sidebar, if you’ve come here looking for how to connect your PS4 controller to your Mac, you’ll be pleased to know that it’s basically native! Just connect it to your Mac with a wire or Bluetooth and it should be immediately compatible with any controller-compatible games.

With the correct profile or a little setup, you can use either of these controllers while emulating games on your Mac.

Connect an Xbox One Controller to Your Mac

Unlike the PlayStation 4 controller, the Xbox One’s controller requires some third-party software to work properly. Xone OSX was the best of several options, but it has since been deprecated. 360Controller is the most up-to-date of the options, and you can download it from GitHub. It does require macOS 10.11 or up, so it won’t work with a Mac running anything below El Capitan. These “drivers” install a kext (kernel extension) to tell macOS how to work with the Xbox controller. Since there is no native kext and Microsoft, one of Apple’s major competitors, has not made one, we need to rely on the kindness of strangers.

1. Once you’ve downloaded 360Controller, open the package and run the installer. Do not connect the controller yet.

2. Restart your Mac when prompted by the installer.

3. Once your Mac restarts, you can connect the controller via USB cable.

5. Click on the “Xbox One Controller” preference pane that’s just been installed. 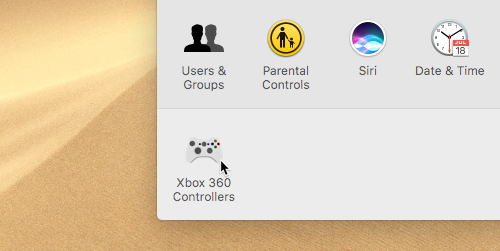 6. In this preference pane, you’ll see a screen to test your controller’s connection. If you do not have the controller connected, connect it now via micro USB cable. 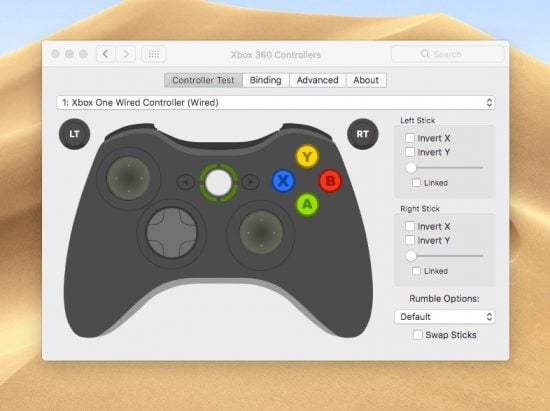 If the controller is not connected properly, you’ll see “No device found” in the drop-down menu.

Setting Other Options for Your Xbox Controller

Once the Xbox One controller is connected to your Mac successfully, you can set some options to make the controller easier to use.

On the front page, you can selectively adjust joystick operation. The main option is to invert either the X or Y axis of the controller. In short, inverting the controls means you press the stick upward to look down like you might expect in a flight simulator. Each stick has its own settings, so you’ll need to be sure to set them separately.

In the next tab, “Binding,” it links each control to its associated function. This page should allow you to adjust which button does what action. However, this functionality does not seem to work properly under current versions of macOS, so we were unable to test it. 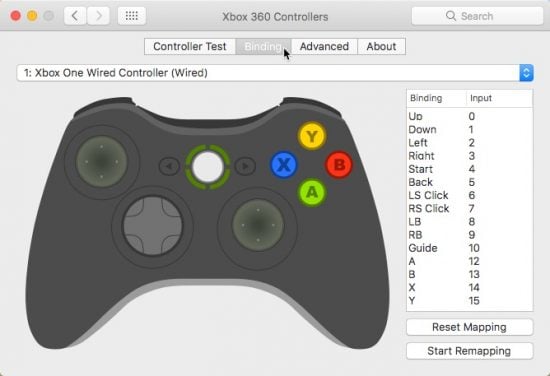 Under the “Advanced” tab, you can calibrate the controller’s sticks to fix dead zones. If you’re having trouble with sensitivity, tick “Normalize” to smooth out your controller’s output curve. You can also toggle the driver on and off or uninstall it completely from your machine. 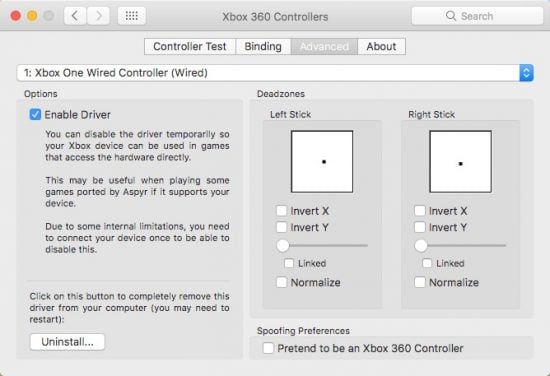 Connecting an Xbox One controller to the Mac is not as easy as it could be, thanks to a lack of native support for the hardware and a lack of interest in creating support. Thanks to the available third-party drivers, you can get the controller to work on macOS. If you’re seeking further guidance or troubleshooting help, consult the ReadMe for 360Controller or visit Tattiebogle‘s website, who is the progenitor of all the Xbox + Mac drivers that are presently available.

Stop Apps From Running at Startup on macOS