You are here: Home / Mac / Apple Music vs. Spotify 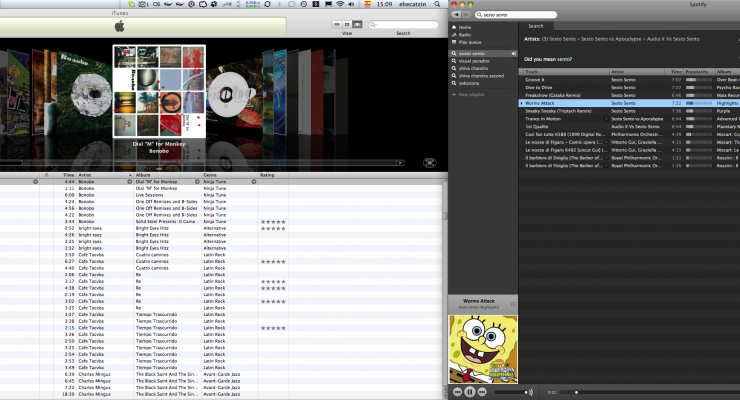 For years Spotify has dominated the paid music streaming market, in fact, the only real players in the game a few years ago were Pandora and Spotify, but now the Apple Music vs. Spotify battle has begun. Spotify is still the boss of the streaming game with 100 million subscribers, 30 million of which are paying for the service. The last time that they revealed their numbers was in March of 2013 when they stated that they had 6 million paid subscribers and the new numbers have only served to intensify the talk of an IPO.

Apple said during WWDC 16 that they only have 15 million paid subscribers, which means that they’re about half the size of Spotify. Apple Music costs the same price as Spotify at $10 a month but unlike the streaming giant, they don’t have an unpaid option. A lot of apple shareholders were hoping that the future of Apple Music could look great and that it would be the perk that the company needs. Apple announced at WWDC 16 that they were re-vamping their interface, there were a lot of complaints about it being to busy and about users having difficulty integrating their own libraries. The company has fixed that with a re-done library tab. They’re certainly not going to get out of the game, but if they’re going to be able to save a lot of money if they don’t have to buy out Spotify.

The catalog for each service is obviously very impressive and it would be tough for anybody to switch. Taylor Swift is absent from the Spotify platform but she is available on Apple Music. Apple music (like Tidal) has also done a great job at securing exclusives, Drake’s “Hotline Bling” first appeared on the platform. While they do have a great selection of exclusive live performances, Spotify has lagged behind a bit in releasing exclusive tracks.

Apple Music’s radio option is also a lot more comprehensive than the similar option on Spotify. Their live DJs provide great tunes so you always know there’s something worth listening to. Spotify’s discover feature is important and a great part of the platform that is now offered on Apple Music. Spotify also offer a 2-hour fresh find feature that gives you the newest music that you might like every week. Both of these playlists make it so that I hardly ever have to go looking for new music, unless my friends suggest something, which they likely found on their own discover playlists and it was a wise move on Apple’s part to put both types of playlists into their platform.

In order for people to switch from Spotify to Apple Music they’re going to have change a bit. They have a catalog that is just as impressive as that of Spotify, but Spotify has the lead at the moment. The social integration that Spotify has put in place has people into the platform because they can relate with friends and follow their playlists. I don’t know anybody that has Apple Music and I’d hate to be the first one to switch from the platform. They offer a few free months with a subscription but there doesn’t seem to be a clear reason to switch. If the platform was only $8, I might consider changing but at the same price as Spotify, I’m not making any moves.

How To Use Apple Music

Want To Cancel Your Apple Music Subscription? Here’s How