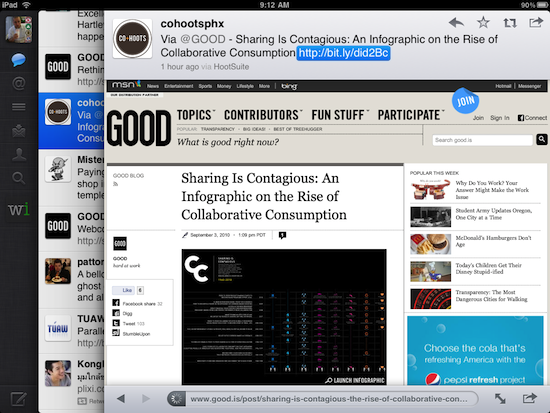 When Twitter bought Tweetie, I wasn’t sure what to think. I was a big fan of the iPhone app, and I wasn’t exactly positive how they could improve it. A few months later they made a bunch of improvements, and I now use it multiple times a day. Once I got the iPad, I realized there was a void in the Twitter world. I tried several Twitter apps for the iPad and none of them really worked well for me. Alright, they worked technically well, but I just didn’t prefer how they performed. Now Twitter has updated the app to work on the iPad, and now we’ve got a winner.

Twitter for iPad [iTunes link] breaks the mold. On the far left is your traditional Twitter options, including spaces for people with multiple accounts like myself. In the middle is your Twitter feed, which you can scroll through easily. Once you click on a tweet, it pops up on the right, along with either the bio of the person who wrote it, or whatever link they had in the post. This makes it act almost like Flipboard, which also makes it easier to see all of the cool things your friends are linking to.

Before the iPad version was introduced, the iPhone was my go-to Twitter client. Now, with such heavy improvements to the interface, I’m all about the iPad version. Just awesome.