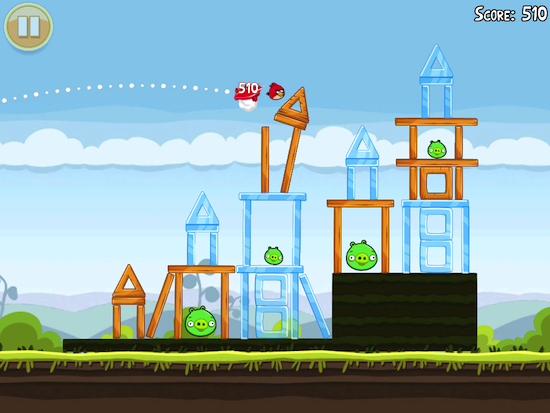 The iPhone as a gaming platform has been pretty successful so far, but for me, it’s not really for serious gaming. I look at the iPhone as a device for casual games that you can play in the waiting room of your dentist’s office, but not for hours of play like I’d spend on Super Mario Galaxy, for example. The types of games that really work on the iPhone don’t have virtual joysticks, and instead, rely completely on touch. Such is the case with Angry Birds [iTunes link]Â and its iPadÂ equivalent, Angry Birds HD [iTunes link].

The premise goes like this: You’re a bird. A group of green pigs has stolen your eggs and have taken them to some secret place. You’re pissed – really pissed – so you go after them with all of your powers. To do that, you have to knock down the structures around the pigs, and kill them in the process. There are birds with different skills for each job, and each one works well for one situation or another. You launch these birds using a slingshot, and you aim them with your finger. It’s pretty neat.

This is one of those super addicting games that’s hard to put down. On the iPad, the expansive screen gives you lots of angles on your enemies, and allows you creative ways to take them out. On the iPhone, the birds may be smaller, but they’re still lots of fun to toss around. I’ve been playing on the iPad version for a while now, and just recently got the iPhone version. I’ve spent TONS of time on both of these games, because they’re just hard to put down.

Sure, these apps do cost money, but this is one of those times that it’s worth the purchase. It’s fun, addicting, and easy to play on the various devices. What more do you need?