by Kevin Whipps 13 years ago2 months ago
1 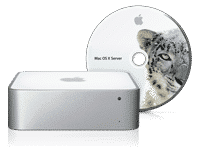 One of the more interesting notes to yesterday’s Apple announcements is the addition of the new Mini Server, a compact little product that sports two 500 gb drives and Snow Leopard Server, a $499 addition by itself. Mac geeks have been using Minis as servers for years – see macminicolo if you don’t believe me – but why would Apple announce it now?

A Mini server would definitely fit under the “niche market” category, just like the AppleTV seems to be, but it may also be an affordable way for small businesses to break into the server market. Buying an XServe isn’t cheap; there’s the individual unit, any custom tweaks or software and then the cost of Snow Leopard Server to consider, making the entry point for a business wanting a Mac server to roll well into or close to the $4g mark. Not everyone has that kind of capital, particularly when Windows or Linux servers are available for very competitive prices.

But for the small business owner, the person who has a staff of 4 and wants to host his own e-mail/web services/iCal calendars, this all of a sudden becomes accessible. With a substantially smaller price point, this becomes a viable option that I think a lot of small businesses may jump on. Sure, it’s not for everyone, but it’s not meant to be. I’m sure Apple would be fine if they sold only a few thousand of these servers in the first year. That’s because once those companies get bigger, they’ll need bigger servers and the XServe will be there to fill the gap.

It’s an interesting plan, and I can’t wait to see how it plays out.