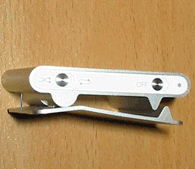 A member of the Apple Insider forums writes that his second-generation iPod Shuffle’s clip was bent when he stood up from a seating position with his shuffle clipped to his watch pocket (yes, that’s what the fifth jeans pocket is called).

“Today I was wearing my iPod like the picture on Apple’s [iPod] shuffle page. When I stood up, I heard something falling on the ground. It was my shiny new iPod,” he wrote. “But no big deal I thought — until I picked it up. The clip was bent like a piece of cardboard, and is impossible to get straight again.”

The damage to the shuffle’s clip had no affect on the user’s ability to play and listing to music, but as he points out, Apple developed the player to fit precisely into its accompanying docking station, which the bent clips now prevents.

This is reminiscent of the first-gen iPod nano’s tendency to scratch easily and even have its LCD easily crack. I was thinking of getting a new shuffle for myself, thinking it would be sturdy enough for my needs. But with news like this, I’m thinking Apple had better improve on this new design first.