Steve Jobs Makes the American Cool Exhibit at the Smithsonian...

by Noemi 9 years ago4 months ago

You either love Steve Jobs, or you hate him; both with a passion. I suppose though, that love or hate him, one can hardly deny that he is one cool guy – at least in terms of what he has brought to the world of consumer technology. Personality aside, Steve Jobs made a contribution that few can match.

So yes, I guess it is apt that he made it to the American Cool Exhibit at the Smithsonian National Portrait Gallery. The discovery of his inclusion was made by Mr. Byte Cellar himself, Blake Patterson. This is the same guy I  very nicely asked almost two years ago to let me into his awesome museum-like man cave, and during one of his recent museum trips with his family, he saw the Steve Jobs exhibit. 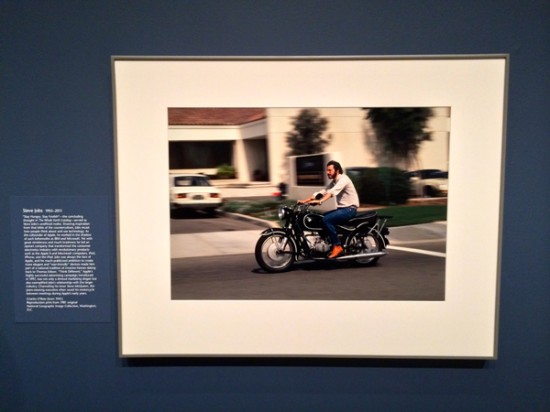 The American Cool Exhibit is all about:

Each cool figure was considered with the following historical rubric in mind and possesses at least three elements of this singular American self-concept:

1.) an original artistic vision carried off with a signature style

2.) cultural rebellion or transgression for a given generation

Does the late Steve Jobs qualify? The inscription says so.

“Stay Hungry, Stay Foolish” — the concluding thought in The Whole Earth Catalog — served as Steve Job’s unofficial motto. Drawing inspiration from that bible of the counterculture, Jobs recast how people think about and use technology. As the cofounder of Apple, he worked in the shadow of such behemoths as IBM and Microsoft. Yet, with great nimbleness and much brashness he led an upstart company that transformed the consumer electronics industry with revolutionary products such as the Apple II and Macintosh computers, iPod, iPhone, and the iPad. Jobs was always the face of Apple, and his much-publicized ambition to create more elegant and “user-friendly” devices made him part of a national tradition of inventor-heros dating back to to Thomas Edison. “Think Different,” Apple’s highly successful advertising campaign introduced in 1997, was not only a shrewd marketing slogan but also exemplified Jobs’ relationship with the larger industry. Channeling his inner Steve McQueen, the jeans-wearing executive often raced his motorcycle between meetings during Apple’s early years.

What do you think? Steve Jobs American Cool?