by Corey Tamas 9 years ago5 months ago
1

Welcome your new overlords
Everyone loves a success story, and Popcap’s Plants vs Zombies (for iPhone/iPod or iPad) was certainly that. When released in 2009, many considered it to be the first truly killer game for iPhone. Easy to learn, tons of content, and cute as the dickens, PvZ even showed up in Apple’s iPad TV commercials, no doubt due to the touchscreen-friendly interface and its charming visuals.

But just as nature abhors a vacuum, game publishers abhor a hit without a sequel. A few years have passed, but Plants vs Zombies 2: “It’s About Time” has finally been released. It’s a no-brainer that the popular game would see a second chapter, but what we didn’t realize back in 2009 is that it’d come to us from Electronic Arts. In 2011, EA purchased PopCap and its properties, and so this long-awaited title is now under the control of the gaming world’s 800 pound gorilla.

For better or worse, there are some obvious differences between PvZ and PvZ2 which are unarguably because of its new masters. 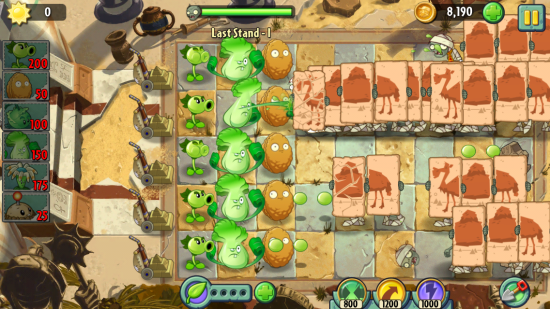 Good to be back
The gameplay of PvZ2 is so close to that of PvZ that it hovers precariously between “that’s a good thing” and “that’s a bad thing.” On the one hand, there’s much to be said about the maxim “If it ain’t broke, don’t fix it.” On the other, there’s also a lot to also be said for the question “Why did it take four years to create a sequel that’s so much like the original?”

The original Plants vs Zombies was a truly innovative twist on the “tower defense” game style, and PvZ2 follows closely in its footsteps. A lumbering rabble of dim-witted zombies crosses the screen from right to left, attempting to make it all the way to the other side. To defend yourself, you plant all sorts of wild plants in the ground, each of which has a specific talent that helps neutralize the undead. As you play, you gather bits of falling sunlight as a form of currency with which to buy more powerful plants, but the zombies gradually encroach in bigger and bigger droves and will eat those plants if they’re not knocked out in time. 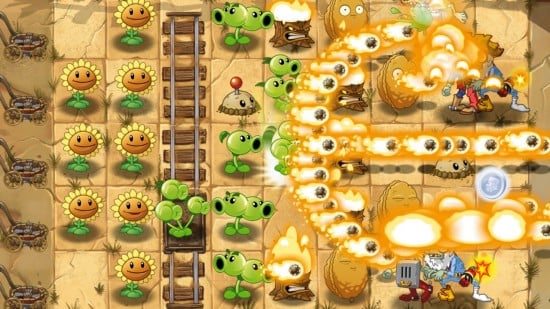 Don’t get us wrong; there’s a fair amount of new stuff in PvZ2. Lots of new plants, such as the Coconut Cannon (a heavy mortar like PvZ’s Cob Cannon), the Snapdragon (which breathes fire over a short area in front of it), and the hilarious Bonk Choy (which delivers furious fisticuffs to zombies that come near) – to name a few. Many of the old standards also return, such as the Wall-Nut, the Potato Mine, and – of course – the Sunflower. There are also various themes the player is led through as the campaign progresses, from an ancient Egyptian setting, to the deck of a pirate ship, and an old west showdown. Each has its own rogues gallery of hilarious zombies. There’s the Ra Zombie who steals your precious sunlight, the Swashbuckler Zombie who swings on a rope in and out of your plant’s aisle of fire, and a Pianist Zombie who makes all the other zombies change lanes as they dance to his tunes. Our favorite is the Zombie Chicken, just because it’s ridiculous.

As for other changes, the player no longer moves sequentially between levels the way you did in PvZ. Instead, each chapter has its own map from which the player can pick levels à la carte and play them (somewhat) out of order if they so desire. The mechanics aren’t so different, but the map provides a visual guide to which levels are completed, how many are left to complete, and at what point new plants and goodies can be acquired. 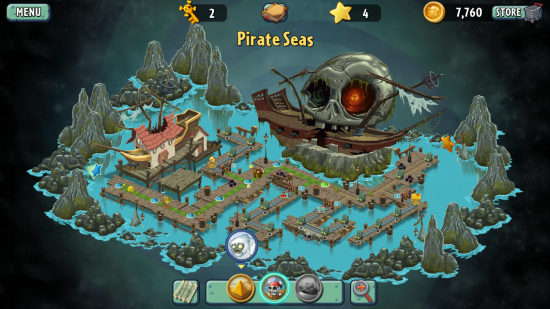 PvZ2 also brings new powerups to the game, which are available through most levels. They come in four flavors: A powerup which allows you to “pinch” zombie heads off, one that lets you pick zombies up and toss them off the screen, one that lets you electrocute a series of zombies, and a “plant food” powerup which supercharges any plant you drop it on. This last one is our favorite, because each plant responds differently to plant food, and it’s a fun adventure to find out which plant does what when it’s supercharged. Powerups can be purchased with coins that are collected throughout the game (except for plant food, which also occasionally drops from random zombies), and they’re good for those nail-biting moments when you urgently need to quickly turn the tide against the undead horde.

Et tu, Electronic Arts?
The final difference between PvZ2 and its predecessor is where you’ll feel EA’s presence most: The game is free, but loaded to capacity with in-game purchases. Want more coins? Click to buy more. Want more powerups? Click to buy more. Want more plants? Pay to unlock them. Want to get to locked areas of the chapter map? That’ll be $1.99, pleaseandthankyou. As you can see, the “free to play” business model which hinges on the player making numerous in-game micro-purchases is the backbone of PvZ2. That, along with in-game ads urging the player to buy more stuff and connect the game to your Facebook account, is probably the biggest difference between the PopCap PvZ era and the EA PvZ2 era. It’s quite possible to get through the  entire game without spending a cent, but you’re in for a long haul and will be reminded many times that you can rocket ahead just by dropping a buck or two in the EA cup. 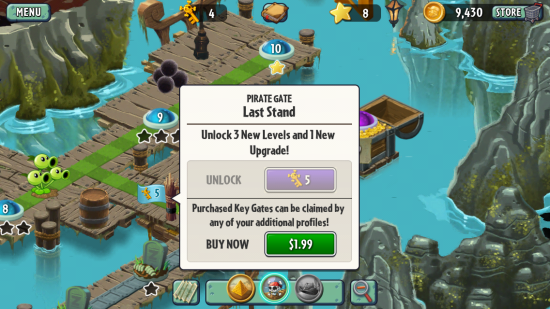 Conclusion
Fans of the original PvZ will find that PvZ2 does little to shake up the tried-and-true gaming style of the original. It’s a bit of a disappointment that EA’s only attempt to bring something truly new to the experience was the new business model, which isn’t exactly exciting for the player. Don’t walk away from this sequel too quickly, though; revisiting a game that zillions of us loved to death has its benefits. It might not qualify as innovative, but Plants vs Zombies 2 delivers exactly the kind of fun we had playing its older brother.