We’ve seen quite some creative iWatch concepts, and not too long ago, we featured Todd Hamilton’s iWatch concept, which I said you’ll want to wear – especially if you’re into that fitness band look.

Today, I ran into another iWatch concept which takes a different approach. Instead of going sleek, slim, and rectangularish, designer Tomás Moyano has opted for the traditional round shape. 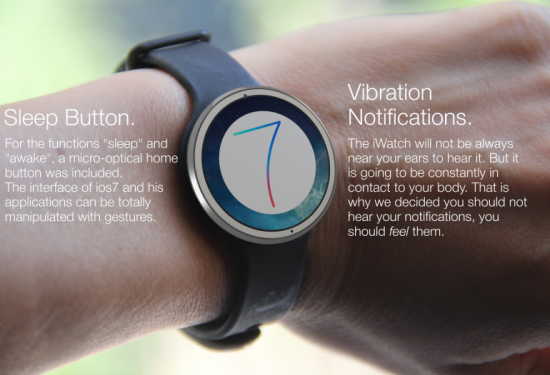 Still sleek, and overly simplistic, which is part of its charm, actually.

One thing that makes this iWatch concept cool is that it makes the wearable device watertight – something we all want from wristwatches. This does mean, however, giving up buttons and microphones, something which is not all that bad if you think about it. Physical buttons are overrated anyway!

As Moyano told the IB Times:

“They don’t make anything that my iPhone could not do. I think these products are in pre-beta levels yet. I thought these companies are [moving] the wrong way. How could you wear a smartwatch and constantly be afraid of taking it into the water, trying to avoid dusty places? If we wear watches, it is because we want to take them always with us, and that is not possible with current designs.”

I think the guys has a point, doesn’t he?

So how do you get notifications? Via vibrations!

Here are some more key aspects of this particular iWatch concept:
solar energy
wireless recharging
no cellular connection and no Siri; mere connection to the iPhone (which may be a disappointment, actually)