iTunes Rentals getting off to a slow start – is... 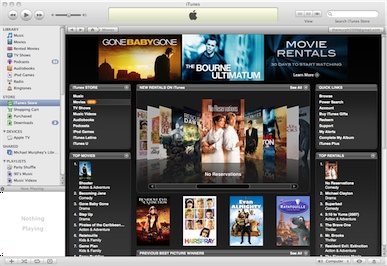 Apple promised us 1,000 rentals in the iTunes store in January, but here we are on March 4th, and the iTunes store has a scant 384 titles available for rent – and only a handful of those are in HD according to Apple Insider.

Some want to blame the studios for the hold up here -but I have to say, I find that particularly hard to believe. Why? Well – look at all the other online rental services – from Amazon to the Xbox, they have thousands of titles ready to go. This is the studios’ preferred method of online distribution…one where they get to own the content and we only get to borrow it. I find it hard to believe that they would hold up the project.

Perhaps there are scaling issues that Apple is addressing to ensure that the content they have is delivered properly and in a quick, efficient manner. I have to say that my HD downloading experience has not been fantastic with the AppleTV, and the “HD” movies aren’t always even in true 720p high-definition.

Apple is not a company that usually fumbles this much publicly, and for some reason the AppleTV seem to be a constant source of problems for them. From the initial release of the device which was delayed, then luke-warmly received, to the current software update which was – again -delayed. Now we’re looking at the movies being delayed as well.

What gives? Why is this particular project proving to be be so difficult for Apple to pull off?