Christmas in May, June or July at the Apple Store,... 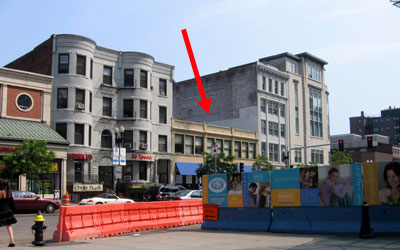 When Iâ€™m sitting in line outside the Boston Apple Storeâ€™s Boylston Street entrance on May 15, Iâ€™m going to be blogging and probably Twittering about the experience.

It wonâ€™t be totally about the free T-shirt Iâ€™ll get at 6PM when the doors are reportedly going to open for the first time to customers. No, it will be about the Apple pron I plan to fondle while in Bostonâ€™s first Apple Store.

Maybe Iâ€™ll plug my blogs into successive iPhones all over the store just to boost traffic. Or maybe Iâ€™ll quiz the geniuses about setting up a home security and backup network using my creaky G4 Tower and my spanking new BlackBook (thatâ€™s the black Macbook – yeah, I paid extra for the color but itâ€™s sooooo choice).

Failing that, Iâ€™m sure Iâ€™m going to poke around and see what great tech goodies are placed strategically around the store.

Iâ€™ve been to a couple Apple Store events, and itâ€™s like being on a movie set. The actors are all in place and smiling, the props (from nano to Mac Pro) sparkle seductively on pristine white surfaces, and the urge to rub your credit cardâ€™s magnetic strip raw is a basic instinct.

Faced with all that, here are my plans for purchasing or kicking tires when the store says hello this month.

1 – Iâ€™m going to seriously think about an iPhone. Early this summer the 3G version is rumored to make its appearance and the bigger rumors are that it will be at an incentive price, will be faster and will have tricks like iChat and video up its silver and black sleeves.

2 – Iâ€™m going to touch an Air. I still havenâ€™t gotten my paws on one of these sliver-thin marvels and I just want to touch it. I wonâ€™t be purchasing one until it comes way down in price and offers a drive of at least 250GB. But lifting and holding this marvel will likely eclipse the time I was a valet parking attendant in Boston and took the Porche once around the block before parking it, just because I could.

3 – I will find out all I can about AppleTV. For years Iâ€™ve had a dream of running my own Mac-based DVR and the technology keeps daunting me. I know weâ€™ve got to be close to a complete and easy solution to running your television taping through your Mac. Maybe MacTV is all that and a bag of chips. Iâ€™ll just have to ask some questions about adding memory, installing programs and maybe making it more like a Mac Mini that is built for entertainment.

4 – Iâ€™m gonna get me one of those iPod to TV cables. I now have a biggish television and an iPod Classic. It burns me that the cable to suck video from my iPod and play it on the big screen is proprietary, but I want to watch Cranky Geeks and some other podcasts in high-def. Right now this is the only way.

5 – Finally, I might consider how much of a value the $99 year-long training is. The people at Apple call it One to One and you can customize it to your needs. I would like to get more from GarageBand and learn how to set up a VPN using my collection of Macs. And of course I want to find out how to solve that DVR thing once and for all.

Iâ€™m sure your mileage and your wish list will vary. But one thing I can guarantee is that if you hang out at the Apple Store opening, youâ€™d best leave your wallet at home because youâ€™re probably going to walk out with something shiny and new to go along with your free T-shirt.

Jeff Cutler writes materials that appeal to people other than the Mac-focused. Find more of his words at www.jeffcutler.com, www.bowlofcheese.com and www.thingstoworryabout.com.