You are here: Home / Lifestyle / Behold: The iPhone 4 Coffee Table! 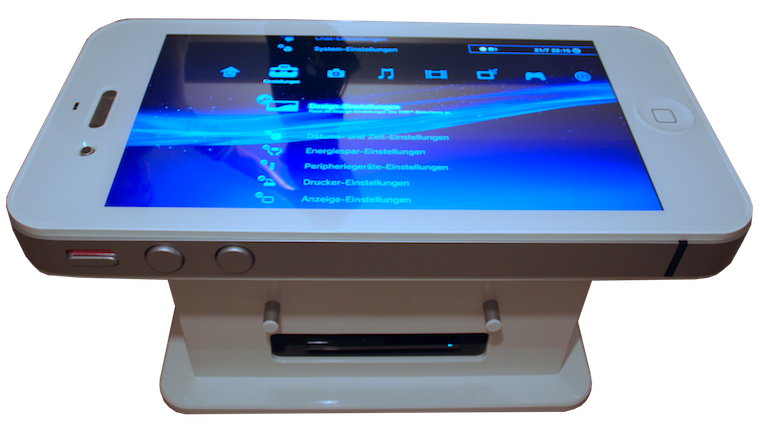 Take a look at the iTableous. Created by German engineerÂ Benjamin Bachmeier, this one-of-a-kind table is a 10x scale replica of a white iPhone 4, though it’s big enough to be a huge tablet. It even has innards similar to Apple’s popular phone.

Let’s break down the iTableous’ specs: Bachmeier lavishly reproduced every last aesthetic detail of the iPhone 4 for his techno-table, even down to that pesky external antenna on the sides. The over-sized external buttons are used to control the main power, the PC’s power, volume, and fan speed.

Seriously, how amazing does this thing look?Â Apple should hire this guy to start manufacturing these. They’d sell like hotcakes to Apple’s higher-end clientele.

To operate the table/computer (which kind of makes me think of Microsoft’s Surface multitouch table), there’s a keyboard and mouse connected to it. You can also connect other devices to it, including an actual iPhone. The giant flap where the SIM card slot would normally be is actually a little door that gives you a peek at the wires and circuits inside.Â The iTableous can’t make phone calls like an iPhone, but you can use the HD camera inside to video conference when you’re online.

No idea how much it cost to build. I wonder if it would be possible to build a version that actually has a big touchscreen and phone-making capabilities? Somebody get on that, stat.