Get Yourself an Anime MacBook Air Case

by Ayran 1 year ago8 months ago

Are you also a fan of anime just like us? While it’s common to find abstract or plain MacBook cases, there are actually quite a number of nice cases with anime designs as well. For this post, we’re sharing with you some of them specifically for MacBook Air. 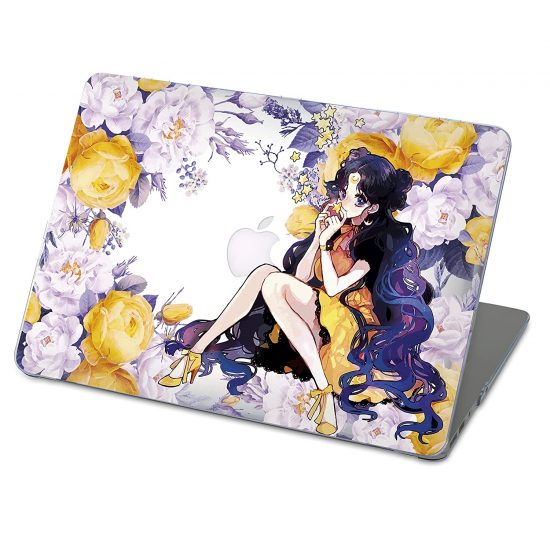 Sailor Moon is such a classic! If you’re the ultimate Luna fan, specifically in human form, then this MacBook Air case is definitely for you. It features human Luna surrounded by purple and yellow flowers, her long purple hair cascading beautifully. This case uses UV printing to ensure that the image would be scratch-resistant. It has a glossy finish and the package includes a top and a bottom cover. 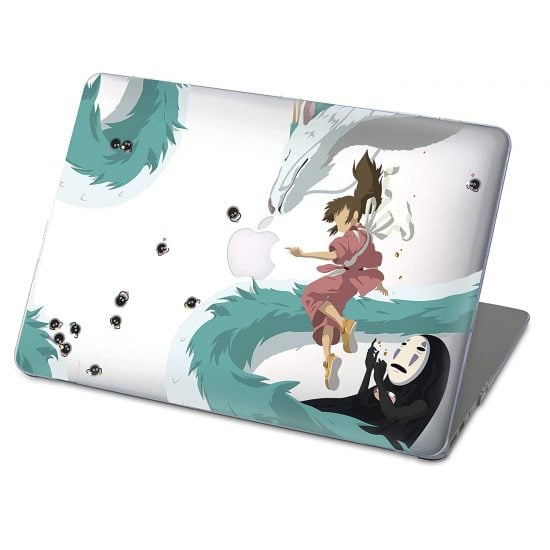 Can you really call yourself an otaku if you don’t know Spirited Away? Many fans love this film, to the point that they’d travel to places reminiscent of scenes from Spirited Away. This one features Chihiro and Haku floating together. On the lower right corner is Kaonashi, more popularly known as No-Face. The design of this case is inspired by The Great Wave of Kanagawa. 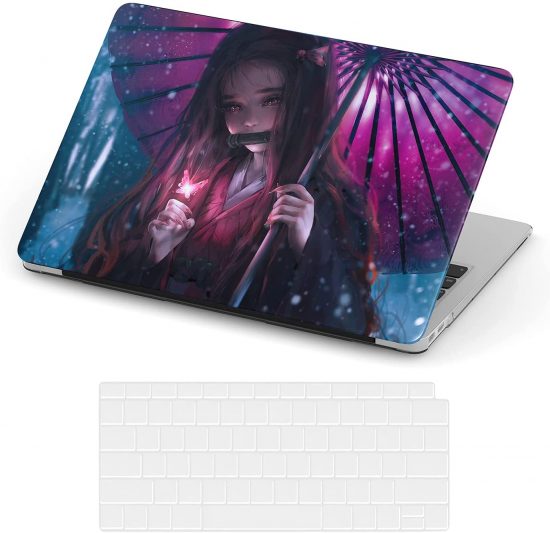 For a more recently popular anime option, what about the Demon Slayer? Out of all the characters, if you like Nezuko the best, take a look at this pretty dark MacBook Air case. It features Nezuko holding an umbrella while looking melancholic against a dark purple backdrop. The color combination, plus the cute look of Nezuko, is certainly a winner for Demon Slayer fans. 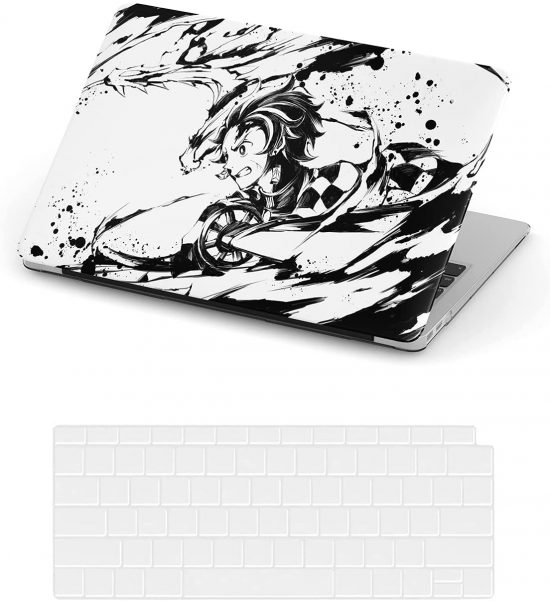 What about fans of Tanjiro? This MacBook Air case features Tanjiro in the middle of a fight (presumably against a demon) with blood spilling everywhere. It doesn’t have any colors aside from the black anime drawing of Tanjiro, but that is what makes this case so striking. Do note that this covers the Apple logo of your MacBook Air, but that’s a small sacrifice given the striking design. 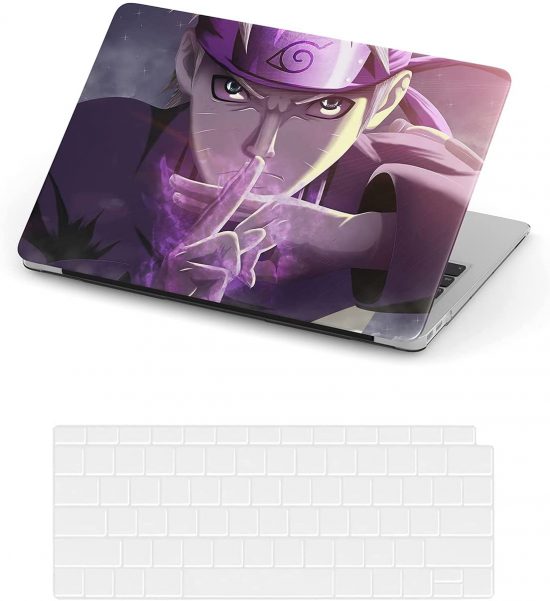 Don’t tell me you haven’t heard of Uzumaki Naruto? It’s one of the most popular anime ever known. This orange-haired dude has a vibrant personality and is known to never give up on his friends. If you’re a fan, this Naruto MacBook Air case might interest you. It features an adult Naruto ready to battle. The dark purple theme adds to the ominous fight to ensue. Do note that this case covers the Apple logo as well. 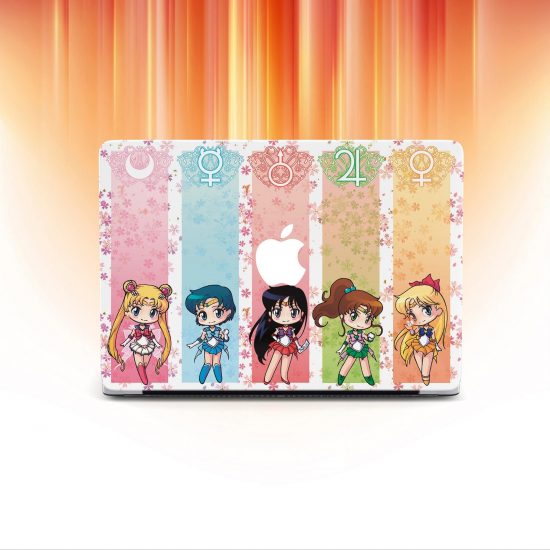 Back to Sailor Moon, this cute MacBook Air case features the Sailor Moon characters in the chibi version. Aren’t they just adorable? It’s a fun and colorful MacBook Air case that’ll surely catch the attention of any Sailor Moon fanatic. The case itself is made from high-quality materials that are also friendly to the environment. 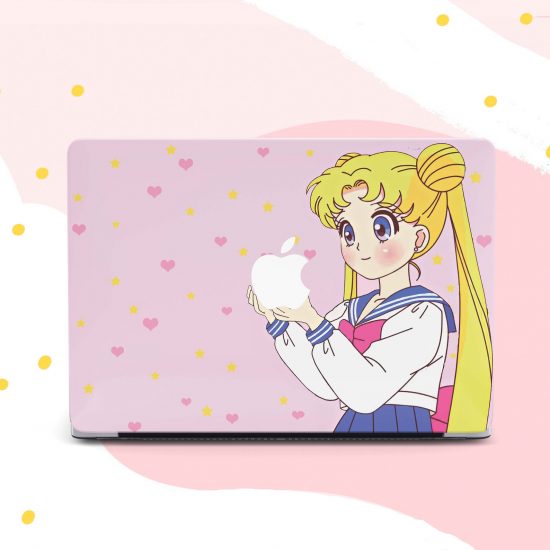 If your actual favorite is Usagi Tsukino, which is the main character of Sailor Moon, this cute pink MacBook Air case is for you. It features Tsukino in her adolescent version holding the Apple logo. On the background are numerous pink and yellow hearts. This is perfect for anyone who wants the Apple logo still visible even with the case on. 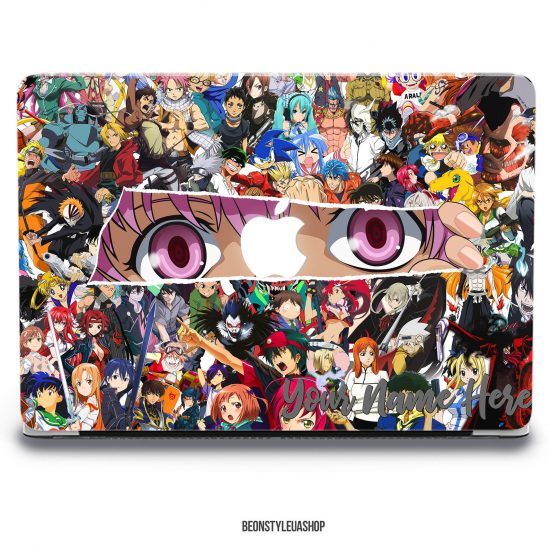 Love all types of anime and can’t pick just one? Then get an Anime Crossover MacBook Air case. This is a cool case that features characters from several anime series like Sailor Moon, Naruto, One Piece, Digimon, Full Metal Alchemist, Bleach, and many more. The case is pretty vibrant, thanks to the colors brought together by the different characters. Even better, it comes in transparent color if that’s more your style. 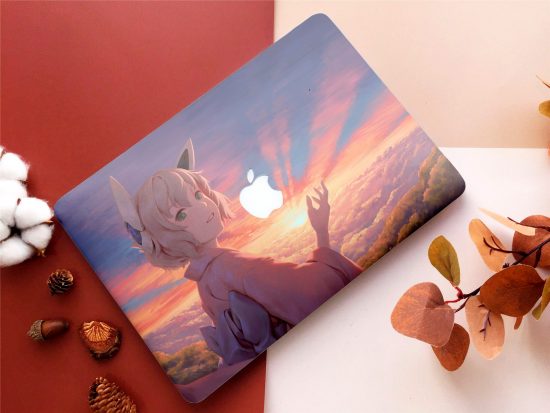 If you just like anime in general, with no favorites whatsoever, maybe you can get one that’s cute but also calming to the eyes. This cute anime with a sunset as its backdrop is a prime example. The girl on the case reminds me of Chi from Chobits. With the pink and blue hues on the background, this case looks so pretty. The Apple logo is also visible when using this case. 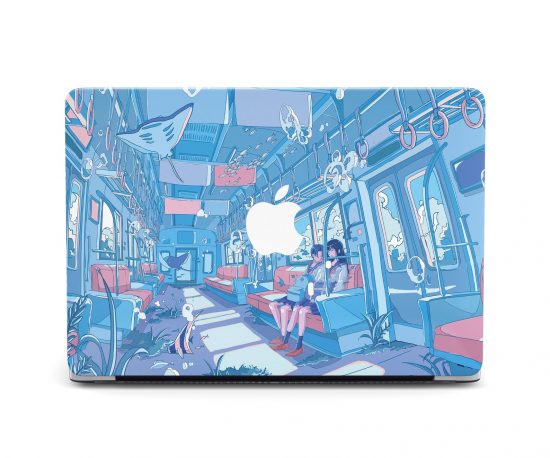 Some anime aesthetics are just so pleasing to the eyes. If you’re into that kind of look, this Anime Train Aesthetics case might be right up your alley. It doesn’t feature any specific character, but rather an anime version of a train scene. This blue MacBook Air case features a train that seems to be underwater. You can see different marine animals floating inside the train. It has a cooling effect when you look at it and you’ll instantly feel calmer.