Do Apple and the Hollywood studios think rentals could replace... 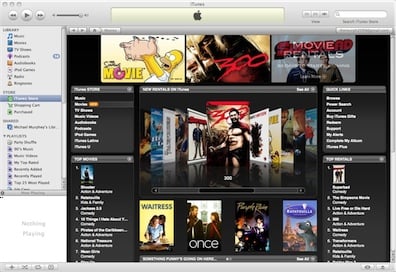 After re-watching the Macworld Keynote, and watching the Macbook Air guided tour I am getting the impression that Jobs and Co. may think that rentals from iTunes are a viable replacement for actually owning a DVD collection.

At the Keynote Jobs explained that customers don’t want to rent their music – they want to own their music – because they listen to a song thousands of times over their life…but they only watch a movie once or twice. So, rentals make more sense for movies.

Now, immediately, a hardcore movie fan is going to tell you that’s crazy, they want to own their movies so they can watch them over and over again, and build their collections. That’s fine. Your opinion is noted – but we’re not talking about what people may actually want to do here – right now we’re talking about what Steve Jobs SAID they want to do…which are not always the same thing.

SO, Jobs says people want to RENT there movies – not own them – in the Keynote. Then, if you watch the Guided Tour of the Macbook Air, the host even states that “now you can rent movies from the iTunes store instead of carrying around DVDS”.

Movies studios, also, were very unsupportive of the idea of downloadable movies in the iTunes store…with only a handful actually signing on. When you switch the model to rentals, however, they all immediately signed on board.

So that leads me to ask – Do Apple and these studios think that the future of movies in the home is renting?

We know that’s a model that Hollywood studios would absolutely love, because the entire DVD business model is built around selling us a movie that we love half a dozen times – if they could sell it to us every time we wanted to watch it – well…that’d be really great for them. Or would it?

The more I sat and thought about this while preparing to write this post, the more I looked at my DVD collection and thought about how often I’ve watched these movies. I have a minimum of $2,000 worth of movies sitting on my shelves – and at least half of them I’ve watched less than 5 times. Most of them I’ve probably only watched once or twice. Why did I buy them? Well, I wanted to KNOW that I had them if I ever did want to watch them. I wanted to collect them. To own them.

However, if I had known they were always going to be there on a server out in the cloud, 30 seconds away from me being able to watch them whenever I wanted, maybe I wouldn’t have wanted to own them so bad.

If I hadn’t purchased any of these movies, and had rented them everytime I wanted to watch them – I think I would have saved a substantial chunk of change…but even knowing that that’s probably true, I still don’t think the idea of rentals will ever replace owning a disk (of course, if you’d told me ten years ago that one day I would stop buying music on a format I could collect I would have told you you were an idiot).

It’s obvious Jobs is ready to get rid of the optical drive. He’s been dismissive of DVDs in the past when discussing the “few customers” who might still want to use iDVD, and the Macbook Air is the first Mac to come without one built in. I fully expect to see more Macs in the very near future that are also sans Optical Drive. We’re not there yet, of course, but we’re getting close.

I don’t know if I like the idea of not owning my movies. I do think that the Hollywood Studios LOVE the idea – and it certainly seems like Apple is ready to embrace the concept – but I’m not sure it will ever take off.

But like I said – I can’t believe CDs are history either…and lets face it – for a growing number of people…they are.