Alternate version of “I AM Legend” in iTunes – is... 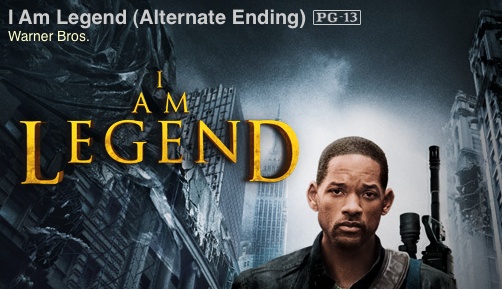 One of the biggest drawbacks of renting or buying a movie through iTunes or AppleTV is that fact that you can’t get any of the cool special features that come with a DVD.

A great example of this is with “I am Legend”. The film had an alternate ending that many people preferred to the theatrical ending of the film. The DVD made a very big deal about this ending being on the film, but if you rented or purchased the movie in iTunes you wouldn’t have the option of watching that alternate ending at all.

Apple has changed that, though – but not necessary in a way that you’re going to love. Now you can rent or purchase “I Am Legend – Alternate Ending Version” where the alternate ending is the actual ending of the film.

I’m not sure what to think about it just yet – what do you think?

You can check it out in iTunes right here.