The Mac App Store – Is This A Good Thing? 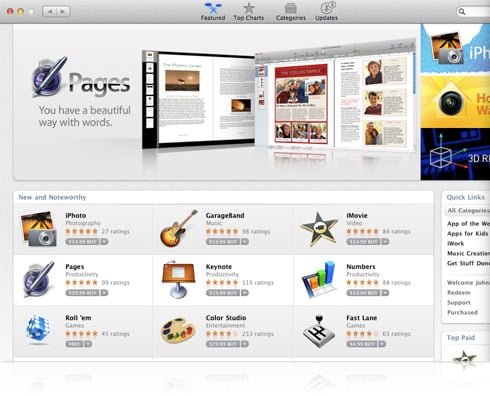 I wasn’t particularly surprised when I heard about the Mac App Store, but my first reaction wasn’t one of glee. Instead, it was more concern.

My father is a software developer for PCs. He’s been doing that for 30+ years now – long enough that he can remember when Apple charged money to develop for their platform. Anyways, he’s just a small guy business, so when I saw that Apple takes a 70/30 cut on all Mac App Store purchases, I thought about the profit margin that would be eaten up in the process.

Then there’s the licensing issue. Whenever my dad sells a piece of software, he licenses it to one computer. He makes money by selling additional licenses to customers, the same way many other companies do. With the Mac App Store, any software purchased is automatically good to use on any other computer with the same Mac App Store ID. That’s great for me, but what about my Dad? If he were coding for Mac, he could potentially lose thousands of licenses just because of the system.

But on the other side of things, there’s the exposure. Being a small business, my dad doesn’t spend a ton of money on marketing and advertising. By entering into the Mac App Store, he could get more exposure for his work, and potentially gain more clients. That would help make up for the other shortcomings, and with a few positive reviews, could boost profits as well.

Ultimately, this is just another user experience that Apple wants to bring to the table. Installing apps through the store become stupid easy, requiring nothing more than a few clicks. You don’t have to download DMGs anymore, because everything is done for you. Plus you can see user reviews right away, making life easier for new consumers. But more importantly, I imagine this will sell more software than before, just because it makes it easy for people who aren’t tech savvy.

In the next 90 days, we’ll see just how well the system works. I’m willing to bet that everyone is going to hop onboard the train for fear of getting left off. I just wonder if Apple is going to be as strict with the Mac App Store and its pricing structure as it is with the other store.