by Michael 15 years ago8 months ago
9 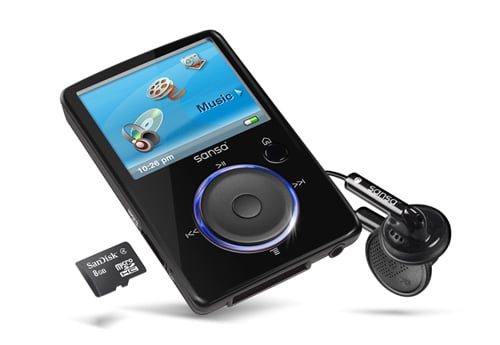 SanDisk put a stop to the rumors that it was going to release a product to compete directly with the 3rd generation iPod Nano today, by revealing the Sansa Fuze.

The Fuze is visibly almost a direct copy of the iPod nano, featuring an almost identical design. The Fuze, like all SanDisk digital audio players, is quite different, though.

The Fuze has built in FM radio and voice recording, in addition to support for a variety of Windows Media stores and Rhapsody. Audible files and, of course, unprotected MP3 and WAV files are all supported as well.

SanDisk also points out that the player is compatible with not only Windows, but also Linux and Mac when working in mass storage mode.

The device also features a microSDCH slot allowing for up to 8 gbs of storage expansion. By default the device will sell in a 2gb version for $80 and a 4gb version for $100. An 8gb version will also be available for $130…all of which are significantly cheaper than their Apple produced counterparts.