Remember Samsung’s name-calling ad that went round some time ago? The ad called iPhone users wall huggers because of the iPhone’s notoriously short battery life. So we are supposed to be always hogging the wall sockets. 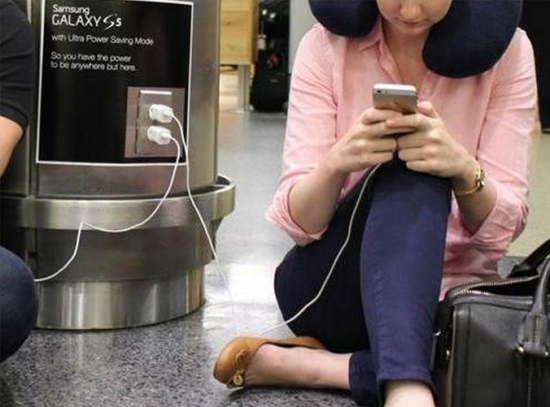 Sure, the battery life can be annoying (that’s what external battery packs are for), but Samsung sure is quick to take potshots at Apple, taking every opportunity to do so.

Those are all in the virtual world, though. Video ads – you have the power to choose whether or not to waste your time watching them.

CNET reports, however, that Samsung is taking things to the real world, where Apple users who need to plug into airport wall sockets won’t be able to ignore their ads, which first explains that the Samsung Galaxy S5 has Ultra Power Saving Mode.

Once you’re blown away by that awesomeness, you’re told: “So you have the power to be anywhere but here.”

Based on the same report, the “angst-inducing ads will be gracing John F. Kennedy International Airport in New York, as well as Chicago’s O’Hare and Midway airports. They may also appear at other airports.”

But what else does it say about Samsung? Desperate? Maybe.

So, iPhone users, how bothered are you by the battery life? And, what do you think about Samsung’s tactics?