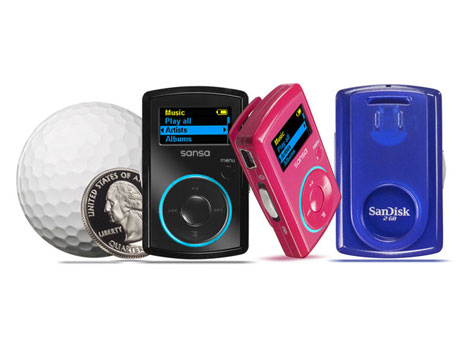 It’s not often that I see a device that I would call a “killer” of an Apple product…but I do think this new player from Sandisk might just claim that title for a few reasons.

1) It has an FM Receiver (which is great if you like listening to the radio, or if you want to tune into the audio for the televisions playing in most gyms)
2) It has a display
3) It can play mulitple playlists, allowing you to navigate them using the display

When this device comes out, if it’s priced around the iPod Shuffle (which it is expected to be), I will consider this over an iPod shuffle for working out at the gym.

Now I’m wondering if we’ll be getting a new iPod shuffle at that rumored Sept. 5th event – while the Sandisk isn’t as sleek looking as the current Shuffle – it does make Apple’s littlest iPod seem a tad behind the times…

You can purchase one here.