RUMOR: These can’t REALLY be the new iPod Nanos, can... 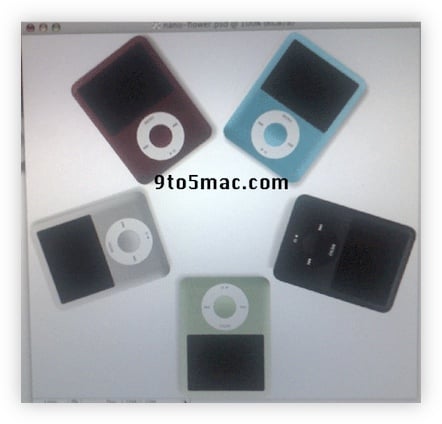 Apple legal has asked Gizmodo to take images that some are claiming are the new iPod nanos off their site. That can lead a lot of people to speculating that the images are real – since Apple has decided to step in and say something about them.

I don’t know if that’s true – but I have to admit, it makes me think there may be a little more to this. However, it could also simply be that these things look stupid, and Apple doesn’t want their investors thinking that those are the actual new iPod nanos.

Either way, let me say that I firmly believe this image above is a fake. There is too much about the image that looks questionable – like it’s trying too hard to be a “spy image”. That doesn’t mean, however, that the image above wasn’t created based on solid information about what these new Nanos are supposed to look like.

I really dislike this design – and I don’t see it fitting in with the look and feel of the iPod line very well, so I hope – personally – that this isn’t real…but you can’t help buy wonder with Apple legal getting involved and 9to5Mac (who are the ones who started this) standing so firmly behind this concept.

They have been reporting about this design for over a month, at least, and have had several different reports on it, claiming to have insider information. If they DON’T have that info, and they are just making these up – or if that info is being sent to them from a fake and they don’t know it…well, if that’s happening, they won’t be around for too long. It’s very risky getting behind something like this so firmly without KNOWING that it’s real.

Either way, I am certainly interested to see the next Apple event, and I hope we get some info on new iPods very soon.