by Michael 16 years ago8 months ago
1 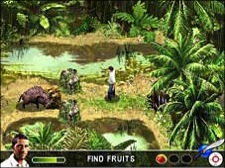 The game was created by Gameloft, a popular mobile gaming developer, and is based on a storyline created by the writers of the television show. In the game you play as Jack and interact with other main characters from the show. The game is custom designed for the iPod, and is the first action/adventure game to be released for the platform.

I plan to download it soon, because I’m eager to see how it plays. The preview video looks good. If this is successful, could a a “Heroes” game be far behind? What about “The Office”? The possibilities for games like this that tie into other iPod downloads are limitless.