You can’t charge the iPhone 3G on (some) iPod Audio... 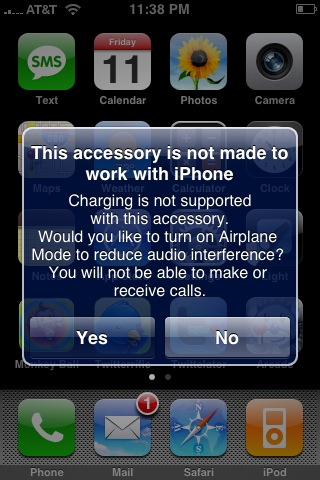 The iPhone 3G has a few drawbacks when comparing it to the original iPhone – the biggest of which (for me anyway) is one that I just discovered tonight.

You can’t charge the device on an iPod Audio system. I have tried every one that I have in my house, including mStation, and others – and when you connect them, you get a message that says “charging is not supported with this accessory”.

So what’s going on here? What is it inside the new iPhone that makes this an impossible thing to do? Any ideas?

So far I can confirm that the iPhone 3G will not charge on some mStation and XtremeMac devices – although it will work on the XtremeMac Luna. I will try to compile a list of compatible players in the near future.

It should also be noted that certain car chargers that work for the iPod will not work for the iPhone 3G either for the exact same reasons as the players. So be careful and do you research before you purchase a charger for your iPhone.