by Michael 14 years ago3 months ago
4 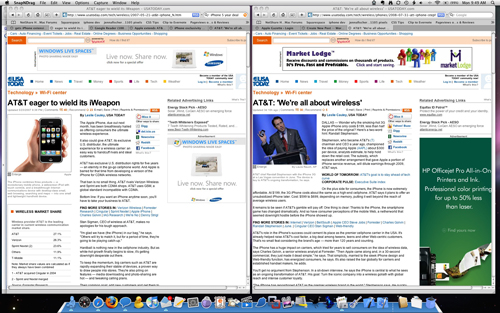 This weekend USA Today posted an interview with AT&T CEO Randall Stephenson. Several other blogs posted about it – and all of them have focused on one thing — the idea that the iPhone exclusivity deal has been “extended” to 2010.

There’s only one real problem with the report. 2010 isn’t an extension of anything…depending on which USA Today article you believe.

When the Apple/AT&T deal was originally made, it was a five year deal. (My source for that? A USA Today article from May 2007). Now Apple and AT&T originally began their discussions in 2005. So even if you wanted to go back and claim that the exclusive began from the time they began working together, and not from the time the first phone was released – it would still be 2010 when it expired…and not an extension.

It is doubtful, though, that the exclusivity deal began at that time. It is an “exclusive distribution” deal, so it would only make sense for it to start when the the first iPhone was released. That was last year. Which means that the iPhone is locked in with AT&T until 2012 (or the end of time if you believe the Mayan calendar).

The new article that was posted this weekend says “In exchange for its payout, AT&T got a year extension, into 2010, on its exclusive distribution deal with Apple, people familiar with the matter say. Sources asked to not be named because the terms are confidential.”

Now, where this becomes really kind of confusing is when you look at the fact that both of these USA Today articles were written by Leslie Cauley. If it were two different reporters I would be less surprised that they contradict one another. You would think, however, if she broke the story about the 5 year deal last year – that she would remember it when her new “people familiar with the matter” contradict her initial reporting.

So maybe its 2010 – maybe its 2012. Either way, if you want an iPhone you’re either going to have to use AT&T or find one unlocked somewhere that fell off the back of a truck…or ebay. Whichever.
So which is it Leslie?