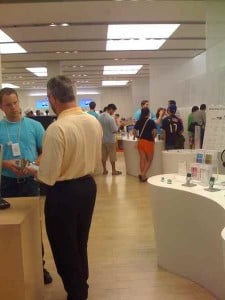 Let me start about a year back. When the original iPhone released on June 27, 2007, I got there three hours early and was third in line. I actually even made the local papers because of it…and was subsequently mocked by some of my friends who walked into the store the next day and picked up their iPhones without so much as a five-minute wait.

Fast-forward a year. Since my original iPhone was starting to show some wear and was having some problems, I decided that I’d pick up the new iPhone 3G. Plus, my wife was interested in getting one, and with an anniversary coming up, it seemed like a good time to upgrade. I’ll forego the drawn-out details of launch day, since most of you probably experienced something similar. Basically, I got to my local AT&T store well in advance of the 8:00 launch, expecting that those that were that gung-ho about getting an iPhone would have already gotten one. I found a line with about 30 people and, due to some work conflicts, had to step out of line at 8:45.

So…this past weekend we took a family vacation to Dallas. I decided that I would give the Apple Stores there a chance. I found one store that had them in stock, and so, at about 7:30, we made the trek to the Apple Store in Plano which opened at 9:00…we being me and my mother (God bless her), who was there so that I could buy a phone for my wife, who was taking care of the kids back at the hotel. At the store, we were met with a line of 57 people in front of me. After a bit, the manager, Ryan (super-nice guy, in the blue shirt in the above picture) came out and said that they only had 30 phones in stock, but that they were expecting another shipment in.

So, I settled in for the wait. The store opened and folks started to trickle in…the line moved…sooo slowly. Finally, around 10:30, the manager came back out said that they had received their shipment, and they would have enough to take care of every person in line, which was now easily over 100 people strong. At least now we knew we weren’t waiting in vain.

Then, the complications began to arise. A new guy, Jared the Apple Concierge, began to walk down the line, “pre-qualifying” everyone for the phones. He said that this was to make sure that those in line would be eligible for the upgrade. But, then he asked the question that started a huge storm…was I the primary user on the account? I’m not…my wife is…but I’m an authorized user. I know personally others who have been able to upgrade simply by being the authorized user. He fed me some line about how the rule had just changed that morning, despite the fact that I had already verified it with the Apple Store manager and AT&T separately. At this point, there were several around me who were becoming more and more irate…there was one 18 year old who’s dad was the primary user and was at work all day…another girl’s mother lived on the other side of the state. Jared the Apple Concierge wouldn’t budge on it though…there was absolutely no way to get the phone. When some of those around us began to hear this, they stepped out of line, after standing there for at least 3 hours. I called my wife, who loaded up our three hungry, fussy kids and headed across Dallas in the middle of lunch hour traffic.

When she finally arrived at the store, it was nearly 1:00. I had been standing in line for almost six hours, two of which had been spent arguing with Jared the Apple Concierge. My feet hurt, my legs hurt, and I was really just ready to go home. But now I was only about six away from the front of the line, and I was getting my phone.

Once we actually got into the store, it was pretty uneventful. My two-year-old found one of the iMacs they had set up with games for kids (you don’t know how proud it makes me that he chose the one with Lego Star Wars), and the Apple employee processed us pretty quickly. I looked around the store and saw that the others from the line who Jared the Apple Concierge had said wouldn’t be able to get phones…getting phones. Whouda thunk? We paid for our phones and left.

I noticed on the way out that the line was still at least 60 people long. I am absolutely blown away over the demand for this thing.

So that’s it. It was a very frustrating, seven-hour wait…frustration that I had initially blamed on AT&T, but now blame solely on Jared the Apple Concierge. Because of his misinformation and lack of willingness to actually verify what he was saying, he needlessly gave dozens of people in line headaches, and caused several others to step out of line unnecessarily. But, I’ve got my new, nicely working iPhone 3G, as does my wife. But I know I won’t be standing in line for the next one.

And if I do, I certainly won’t trust Jared the Apple Concierge.