LG’s Dare would really like to be an iPhone

by Michael 15 years ago10 months ago 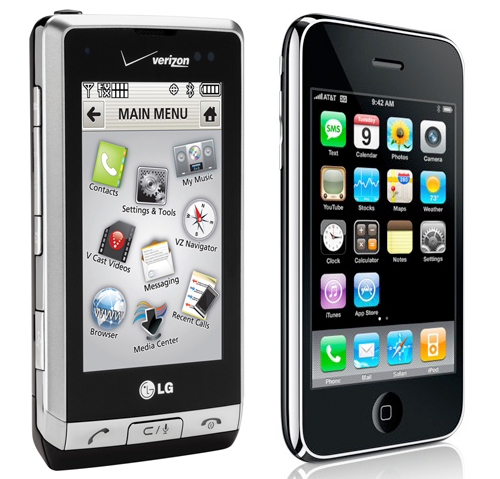 Verizon today began shipping the LG Dare, and has finally revealed the price of the new device. The handset should be available for purchase online by Thursday, and will hit retail stores on July 3rd.

The phone will retail for $250. You then get a $50 mail-in-rebate…which will bring the cost down to $200 when you eventually get your rebate check in the mail.

The Dare is smaller than the iPhone (and is missing the iPhone’s built in storage), but it does have some features that the iPhone itself lacks. For example, it has a 3.2-megapixel camera with flash. It also has a 120 frames per second video capture mode, and a microSD slot which allows for memory expansion.

It does feature a “full HTML browser”, 3G (through EVDO Revision A) and GPS through Verizon’s Navigator.

None of that, however, changes the fact that if you buy one of these you’ll be walking around with a device that looks like a knock-off of the iPhone.

Obviously there is plenty that the LG DOESN’T have that the iPhone will – including the App Store, and multi-touch – but honestly, why would anyone want to run around with something that looks like this?

These kinds of phones are SAD as far as I’m concerned. I am not near fanboy enough to suggest that Apple is the only one that knows how to make a good phone. The lack of original thinking on the part of these other phone designers is just appalling, though.

You can make a touch screen phone that doesn’t look completely like a knock off of the iPhone. I know its possible…someone please at least TRY.

Update: Since this article is getting so much traffic let me clarify a few things.

The LG Dare is a reworked LG Prada, which is a touch screen phone that came out shortly before the iPhone. If you look at the original Prada, its design is quite different from the Dare. For one, it has original and unique icons, that don’t look like they are copied from Mac OS X. The design of the Prada doesn’t look quite as influenced by the iPhone either (which should be obvious, since it would have been impossible for the Prada to have been influenced by the iPhone…because the Prada came first).

This is my entire point. The LG Dare has been made to look like the iPhone. They already had a great looking, original, phone in the Prada, and LG decided it was a better idea to make the Dare look like a cheap iPhone knock-off..when it ISN’T an iPhone knock-off.

It is sad and depressing to me to think that the cellphone industry is just going to tuck tail and start making their phones look and feel like the more popular iPhone. It would be better for everyone involved, including Apple, if they would try to do their own thing, instead of going to such great lengths to imitate the iPhone.

Michael Murphey is primary blogger on Apple Gazette.com, Travelbrook.com and a contributor to TVJab.com for Bloggy Network. He also hosts a daily audio podcast, and weekly video podcast for Apple Gazette. When he’s not blogging you can find him on Twitter.