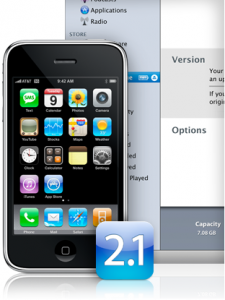 As promised on Tuesday, iPhone update 2.1 is now available in iTunes. Its features include:

I’m pretty excited for the “significantly” longer battery life (assuming it is, in fact, significant), as well as the faster installation of apps and the repeat alert for incoming texts (though I wish they’d add the same feature for missed calls). And after playing the the Genius feature in iTunes, I think it’s something that’ll I’ll get some use out of natively on the iPhone.

As always, simply connect your iPhone to iTunes and hit “Check for Updates”.