I Use My iPhone More for Twitter than for Phone... 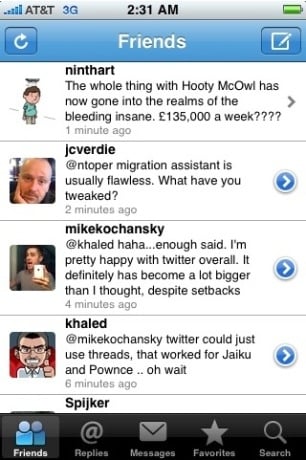 I’ve noticed something over the time that I’ve been the owner of an iPhone. I don’t actually use the phone part except when I have to. I don’t like making phone calls…in fact, I don’t care for the entire phone call making process.

Maybe it’s just because I write so much. I prefer it, and with my job, I spend most of my time communicating with work, my friends, readers, listeners, and PR people all with the written word, Either by IMing, Emailing, Blog posts, or even good old Twitter.

My Twitter Account (which you can find right here) is something that I spend far to much time on. I don’t post near as much as some of the Twitter power users, but if I have a free moment while waiting in line (even at a red light sometimes) I open up Twitterfon and take a look at what’s happening in the world on my Twitter stream.

Tweeting, txting, and IMing from my iPhone are all ways I would rather communicate with people – rather than talking on the phone. Sometimes I wish I could just get the iPhone without the phone part (but still with the data plan…I need my 3G).

It makes me curious…am I alone here? How many of you don’t use your iPhone as a phone as often as you use it for Twitter and txting?