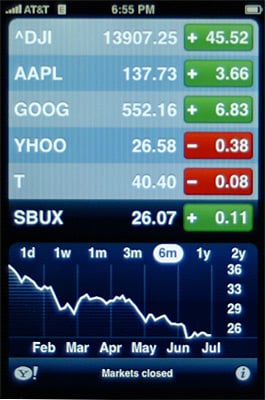 Let’s start the day off with a little sensationalist B.S. shall we?

The fella over at Uneasy Silence has decided to whip out the tin foil hats and spread them around this morning via this article that is titled “EXCLUSIVE: Apple Secretly Tracking iPhone IMEI and Usage (with proof)”

Sounds like a scary title, doesn’t it? You’re compelled to read more aren’t you? Well…let’s continue on…

In the article, Dan (the author), informs us that he’s found proof (PROOF I TELL YOU!!!) that Apple tracks iPhone usage and tracks IEMI numbers of all their iPhones worldwide. Hidden deep within the code of the stock and weather widgets is a string of code to a specialized URL that Apple collects.

What horrible things their doing with your Weather checking habits is unclear, but apparently Apple knowing what stocks you check on your phone could be the end of the world.

Now, let me first say that I would be incensed here, if I thought any wrong doing was happening…but I don’t…and here’s why…

IEMI numbers are in ALL GSM and UMTS phones…and according to the wikipedia article on the subject:

The IMEI number is used by the GSM network to identify valid devices and therefore can be used to stop a stolen phone from accessing the network. For example, if a mobile phone is stolen, the owner can call his or her network provider and instruct them to “ban” the phone using its IMEI number. This renders the phone useless, regardless of whether the phone’s SIM is changed.

After reading that, I really have no idea why I should care that Apple has their IMEI code in the widget applications on the device.

So, what about you? Are you outraged? Terrified? Indifferent?