Google Mobile App’s Voice Search is here…but is it any... 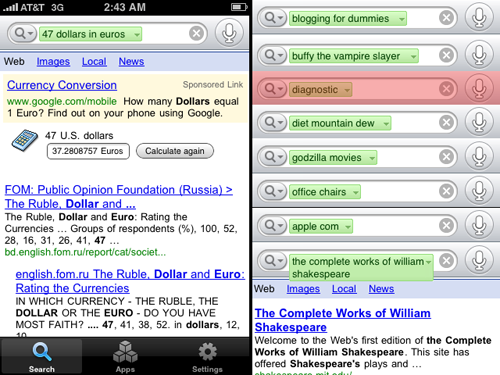 Last night Google’s much hyped update to their Google Mobile App which features an advanced voice search that is supposed to be incredibly accurate. So, after downloading the update, I decided to look around my office and put it to the test.

I tried 10 times to get the App to search for what I was asking for – and here are the results.

1) 47 US Dollars in Euros – Worked – but didn’t do the currency converstion for me, so I tried again.

2) 47 dollars in euros – Worked – and gave me the currency conversion with me having to type in a thing.

6) Diet Mountain Dew – worked – this time a spoke a little slower and it worked just fine.

7) Godzilla Movies – worked – and it even spelled godzilla right.

I was really impressed how accurate this was. I didn’t expect it to work this well because…well…voice apps usually don’t. It was really great. If you haven’t downloaded this app yet – give it a shot. It’s free…and it’s awesome.