(UPDATE: Never mind…as commenter Adam pointed out, version 1.1 was released this morning, and offers a solution for, it appears, every single complaint I had. It’s amazing what difference a few hours will make.)

I’m a fairly casual user of Facebook. I don’t spend just huge amounts of time on it…just long enough to get on, see what my friends are up to, and go on about my business. So, for me, the brilliant Facebook webapp was absolutely perfect. Simple to navigate, pretty well loaded with features, it was exactly what I needed to satiate my social networking fix. With the web app, I had access to virtually anything I could do on Facebook. The native app, however, takes huge steps backward in the way of functionality. 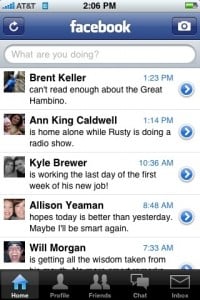 All in all, the Facebook app is a surprisingly crippled venture from a company that released what was (and is) one of the best iPhone webapps around. Unless you’re jonesing to use Chat, there’s no reason to download this until it’s vastly improved.

Drew Corbitt is the newest writer for Apple Gazette. As a more recent switcher from PC to Mac, he brings a slightly different perspective to the world of Apple. He also posts at sister site TV Jab.