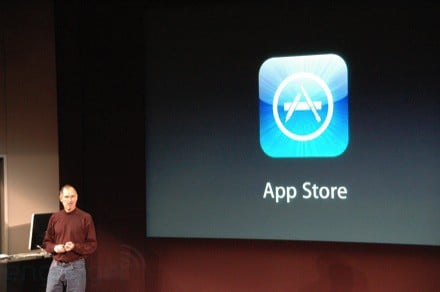 The event started off with Steve Jobs welcoming everyone and going over some stats that show that the iPhone is ahead of everyone…except RIM – and they’re looking to change that.

So, the iPhone will be getting a slew of Enterprise features including: Push Email, Push Calendar, Push Contacts, Global Address List, Cisco VPM, Certificates and WPA2/ 802.1x, Security Policies, Device Config, Remote Wipe, ActiveSync and Exchange support (which will be native on the iPhone).

For those interested, Phil Schiller, not Steve Jobs, demoed all this Microsoft tech on the iPhone.

Scott Forstall then came out to cover the iPhone SDK. He first mentioned several web apps that are popular, mentioning that 20% of all Bank of America mobile banking was done through the iPhone. Then he announced that starting today, developers will be able to use the same SDK that Apple uses to create iPhone applications. Which means, of course, that they will have to use OS X.

All of this will be available to iPod Touch customers as well, but a small fee will have to be charged for the software upgrade.

Then Steve dropped the bomb.

The App Store. It’s installer.app from Apple. You can search for applications, buy them (or get them free), and download them right onto your iPhone.

Developers will get 70% of revenue, and there is NO CHARGE to developers for FREE apps. You can download the SDK in a few hours. It costs $99 to become a developer.

Beta goes out today for the SDK.

There was just one more thing…

VC Capitalist firm KPCB announced the “iFund”. a $100,000,000 (yes, you read those ‘0s’ right) fund for developers wanting funding for developing on the iPhone.

We’ll be getting everything in JUNE – with the release of iPhone 2.0.

After the event, Steve Jobs and co stayed behind to talk to the press and answer a few questions.

They revealed that there will be an electronic certificate attached to apps so that if someone writes a malicious software app they can track them down “and tell there parents”.

VoIP is perfectly acceptable for Wi-Fi according to Jobs.

and the roll out will be international, so all users world wide will benefit.

Finally, parental controls will also be included in the iPhone 2.0 software, allowing parents to turn off features like Safari and the App Store.at.