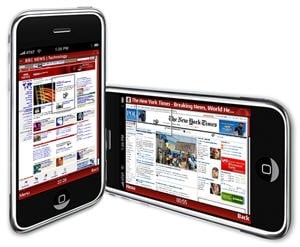 According to a New York Times profile, Opera Software has built a version of their mobile browser for the iPhone – but Apple won’t allow it in the App Store.

Frankly, I find this appalling.

Apple’s resistance to competing apps such as email applications, web browsers and other apps is shameful, and it’s not benefitting iPhone owners in the slightest. Imagine what it would be like if the Mac was like this. Imagine if you couldn’t choose any other web browser but Safari in OS X.

Competition FUELS Innovation. Without it, the iPhone will not see innovations the way that other platforms have. I know some of you are going to come out in defense of Apple in this – stating that “it’s Apple’s sandbox, if we want to play in it we have to play by their rules”.

That is the way that it is right now. The problem is that the iPhone App Store has already grown so large that it is no longer a “get rich quick” arena. Now, there is so much in the store, you truly have to make something special to stand out – and you have to SCREAM to be heard.

Developers aren’t going to stand for this forever. Right now Google is building an ARMY of phones — and while their OS may not be as elegant as the iPhone — the fact hat developers have the same freedom to develop on the Android platform that they would on a desktop WILL fuel innovation on that device.

If Apple keeps this up — the App store will eventually only be filled with a few select corporate partners. Maybe that’s what Apple wants…but that’s not what I want for my iPhone.