G-Form Drops an iPad from Space 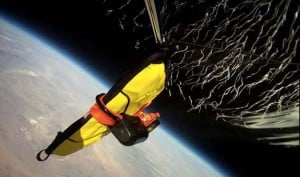 The market for smartphone and tablet cases is a very lucrative one. Smartphones and tablets are an investment, more than an impulse buy because they are pricey so owners of tablets and smartphones will try to protect their gadgets from daily abuse and those near catastrophic accidents that would render them into little more than a nice paperweight. The more protection a case claims to offer the more desirable it becomes to gadget owners.

If we’re going to talk about proofs of the level of protection a case can offer, then there’s no competing with the guys at G-Form. The company, which offers protective cases for iOS devices, among others, has recently come out with a very creative marketing gimmick. The company took and iPad, encased it in its new Extreme Edge case and then tie device on a huge high altitude balloon. The balloon promptly passed through the diferent levels of our atmosphere into the very edge of outer space. At this point the iPad was then sent into free fall back to earth – the whole 100,000 feet journey back to terra firma.

Of course, we can expect the iPad to survive this very elaborate display of toughness and protection (otherwise G-Form wouldn’t release the video). The iPad also landed edge first and not screen first, which would also be a factor why the device remained intact after the fall.

G-Form has proudly declared that their stunt is the first ever time an iPad has breen brought to space, and logically, the first iPad to also undergo a free fall from that height and survive the ordeal. G-Form is now claiming that their Extreme Edge Case is the most protective case for iPads.

G-Form said it will be releasing a new product at the Consumer Electronics Show – a new rugged case for the iPhone.