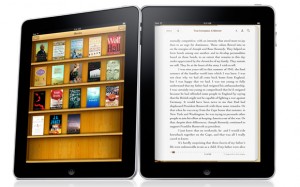 In the battle between the iPad and Kindle, it looks like Apple has won the first big battle. PCWorld is reporting that Amazon has given in to 3 publishers, causing a change in their pricing system for e-books. From the article:

In order toÂ stay competitive withÂ Apple’s iPad, Amazon needs to keep as many publishers in its corner as possible. AfterÂ many of them balked at a $9.99 price-point and embraced the iPad’s intent to sell e-books in the $15 range, Amazon was forced to reconsider its stance. This news means thatÂ rumors of Apple matching Amazon’s prices are false given that publishers are now in control.

Interestingly enough, Random House, the world’s largest book publisher,Â still hasn’t chosen a side, likely out of fear of the iPad’s negative influence on e-book pricing.

I was in Barnes & Noble today and they were pushing the Nook pretty hard. It’s difficult to watch too, because the iPad just owns that thing in so many different categories. But no matter how mice it must be to read on e-ink versus a regular screen, it’s just … ugly. Makes me want to buy the real book, not the pricey reader. It’s got its advantages, sure, but I wouldn’t buy one.

I’m not sold on the e-book thing, and I never have been. But after perusing the iTunes store for Â iPad apps, I discovered a few that really would be great for my son. Kids books are neat because of all the pretty colors, but they also can take up a lot of space. I don’t live in a big house, and his room is already bursting with toys and accessories. Adding a bookshelf to that mix might be a bit much, and I’m not so sure that’s going to be the best way to go. With the iPad, I can order any book he wants immediately, and read it shortly after. That’s pretty cool if you ask me.

The first shot has been fired, and Apple has won this battle. I don’t think Amazon is going to take this one laying down, so we’ll have to see who scores next.