An Hour (or Two) With The iPad 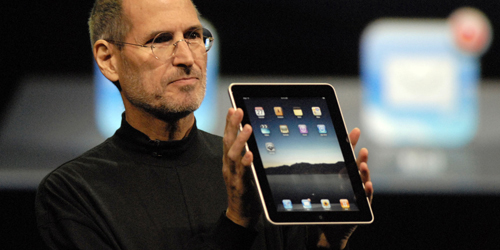 I got a text message yesterday from my buddy, Tim.

“When do want to check out the iPad?”

I couldn’t respond fast enough. I had played with the iPad a little bit at the Apple store the day before, but it was definitely on a small scale. I wanted to play with it more without any pressure from someone watching over my shoulder, and in the privacy of my own home. He came by yesterday and we sat down at the dinner table and spent the next two hours going through every aspect of the device.

Tim got his 16GB iPad for his birthday, and he had it covered with an incase Convertible Book Jacket, which looked pretty cool. A little bit Moleskine, a little bit textbook. It’s a positionable case, and it gives you multiple places to prop up the iPad, making typing and viewing pretty easy. After setting it on its lowest position, I started my little experiment.

I began with typing, something which has beenÂ chastisedÂ for being horrible on the iPad, and tried out the Notes app. I’m not your traditional touch typist, and although I use the home keys, I do most of my typing with my index and middle fingers, plus my left thumb. As a result, typing on the iPad isn’t very difficult. In fact, after very little time on the keyboard, I was pounding out full sentences with ease. I can really see using this for blogging, editing documents and even writing a story on the road. If you had a hard time adjusting to typing on the iPhone, then this isn’t going to work for you. But for me, it was perfect.

Then there’s the screen. I watched part of T2 on Netflix, checked out a few websites, and checked out his photos. The screen is beautiful, there’s no other way to describe it. It’s crisp and sharp, and I have no complaints. Alright, maybe just the lack of HD, although I haven’t confirmed that either.

Overall, the big thing I noticed was attention to detail. In the Notes app, when viewed from the side you notice a stitched leather ring around the perimeter of the app and side panel. The Calendar App has torn off page remnants in the month view. You can see the texture of the leather in the background of Contacts. These little details make the quality of the iPad really stand out. Attention to detail here is amazing.

My time with the iPad seemed like it came to an end too soon, but it helped me cement my decision. I know now that I could use this device every day, doing the things that I need to do to be productive, but without the baggage. It really is an amazing device to hold and touch, and if you haven’t tried one yourself, you really should.