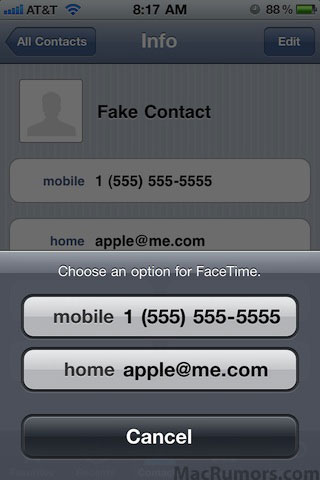 We’ve been wondering for a while now how FaceTime is going to work with other iOS devices that aren’t the iPhone, and according to MacRumors, we may now have an answer.

Apple’s latest beta version of iOS 4.1Â released earlier this week has offered the strongest evidence yet that the company is planning to roll out FaceTime video calling functionality to future non-iPhone devices based on the iOS operating system. A new option in the iOS “Contacts” application allows users to make FaceTime calls using either a phone number or an email address. This would allow FaceTime compatibility with devices not associated with a phone number such as future camera-enabled iPads and iPod touches.

This does make sense. After all, the iPad and iPod Touch aren’t associated with any kind of phone number, but using an e-mail address can be pretty universal. Better yet, this also works well for other non-Apple devices. Remember, Apple is making FaceTime an open standard, meaning that Android phones, PCs with webcams and even a linux-based tablet with a camera and a mic could be running FaceTime as well.

Now to make an obvious prediction: The next iPad has a front-facing camera, as does the iPod Touch. Shocking to go out on a limb like that I know, but that’s what I’m saying.