Cloud-Based Microsoft Office from OnLive is Available on the iPad

by Mike Lata 11 years ago10 months ago 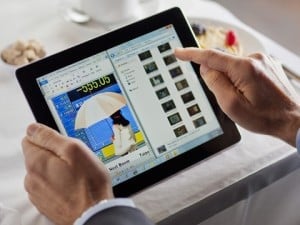 You may have heard of a cloud-based gaming service, called OnLive, that was rumored to come to iPad at some point, but never materialized past Apple’s approval process. The same service is available on Android devices, however, and offers users the ability to play console games with a Wi-Fi connection.

Apple has, on the other hand, approved a different service from the company for the iPad. This service comes in the form of an app. called OnLive Desktop for iPad, and it allows iPad users to take advantage of Microsoft’s productivity suite on-the-go and without having to make any sacrifices (besides relying on a Wi-Fi connection).

What OnLive Desktop does is actually bring fully-fledged versions of Microsoft Word, Excel and Powerpoint to the iPad through the cloud. These apps are available from a virtual Windows 7 desktop environment and stream through the Internet to the iPad. They are hosted on OnLive data centers remotely away from the actual user.

USAToday reported that there are a couple set-backs with the app so far. These downsides include weak or non-existant printer support and lack of support for the iPad’s native keyboard.

According to the report, “within Windows, you can employ touch gestures such as pinch and zoom, drag and drop, and flick to scroll. There’s handwriting recognition, too. I frequently summoned the onscreen Windows keyboard, but the iPad’s own onscreen keyboard doesn’t function within the OnLive environment.” 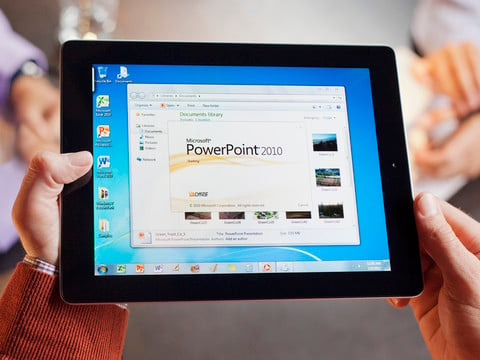 However, you can easily use a Bluetooth keyboard as another option with the app. Although USAToday mentioned some screen orientation issues that may be prevalent with the keyboard if connected through the dock.

“When I connected my iPad to an iPad keyboard dock, OnLive’s screen was oriented horizontally and didn’t adjust even though the iPad was propped vertically,” according to the report.

Some of the things the apps will allow you to do include the ability to edit and review Word documents, add graphics or video to PowerPoint presentations and work on cells in Excel. The service also comes with 2GB of cloud storage and can share files from across the iPad, PC or Mac.

Another recent addition to this service happens to be Adobe Reader for viewing PDF files. There are also other service plans available for heavy users such as an OnLive Desktop Plus plan – Internet Explorer is the key attraction to this plan — with the ability to play Flash content. There is also a Desktop Pro plan that offers storage of up to 50GB.

The OnLive Desktop app has actually been available since January, but it has been gathering steam recently and gaining attention among enterprise users. This all comes as rumors of Microsoft’s Windows 8 tablets remains a hot topic and the fact that Microsoft may be releasing Microsoft Office on the iPad as an official app.

You can currently grab OnLive Desktop for iPad on the App Store for free — with the above-mentioned service options available directly from OnLive.

What will remain interesting is if Apple will allow the OnLive gaming client on the App Store if the two companies continue a positive working relationship related to cloud services.